Generational inheritance is a foundational property of life. We cannot help but notice, from even the most casual study of living things, that lilacs produce lilacs, lions produce lions, and so on. Similarly, we have all known a daughter who clearly has her father's eyes, or perhaps a son with his mother's smile. Even to the naked eye, it is apparent that biological information is transmitted from one generation to the next. Life begets life. But for much of history, the details of this process lay shrouded in mystery.

With the elucidation of the structure of DNA by James Watson and Frances Crick in 1953, the problem of inheritance was partially solved. The linear biopolymer proved to be the bearer of biological information by virtue of its long, aperiodic sequences of four nucleobases: adenine, cytosine, guanine and thymine. But having established this, an equally important question still remained: How did DNA sequences specify the sequences of proteins? Crick aptly described this mystery as the coding problem: "This problem of how, in outline, the sequence of four bases ‘codes’ the sequence of the twenty amino acids is known as the coding problem. It is regarded as being independent of the biochemical steps involved, and deals only with the transfer of information (1)."

Over the course of the 1960s, the genetic code was cracked. The experimental determination of its details was heralded as a triumph of science, culminating in the awarding of the Nobel Prize in Physiology or Medicine to Holley, Khorana, and Nirenberg in 1968. Per the Nobel Foundation, the prize was awarded “for their interpretation of the genetic code and its function in protein synthesis” (2). Crick would later offer a celebratory summation: "The inherited master plans controlling every living organism are written on the genetic material in each cell. These plans are coded instructions to the cell for making proteins. The recent breaking of the code opens a new era in biology" (3). 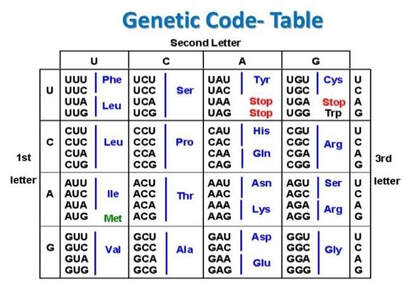 What is the Genetic Code?
We should be precise about what the genetic code is. It is not exactly right to say that a sequence of DNA—that is, a gene—is a code. It is more accurate to say that a gene is an encoded sequence. The genetic code allows for the interpretation—or decoding—of this sequence. Biophysicist Vahe Bedian has stated it plainly enough: "The genetic code, which establishes the relationship between polynucleotides and polypeptides, is the set of associations between components of the polynucleotide descriptors (nucleotide triplets or codons) and the building blocks (amino acids) of polypeptides, executed by protein derived from the same code" (4).

The Error of Physicalism
Strangely, there are some who object to this plain understanding of the genetic code. They will make a variety of comments akin to these:


Statements of this kind are based in a flawed, reductionist philosophy called physicalism. The physicalist wrongly imagines that biology can be reduced to principles of physics and chemistry—that is, to purely physical phenomena. But this is simply not the case. As theoretical biologist Marcello Barbieri has noted, the genetic code "is compatible with the laws of physics and chemistry but is not dictated by them" (5). Elsewhere, he explains:

The physicalist thesis would be correct if genes and proteins were spontaneous molecules, because there is no doubt that all spontaneous reactions are completely accounted for by physical quantities. This, however, is precisely the point that molecular biology has proved wrong. Genes and proteins are not produced by spontaneous processes in living systems. They are produced by molecular machines that physically stick their subunits together and are therefore manufactured molecules, i.e. molecular artefacts (6).

Physicist Juan G. Roederer draws a similar contrast. He identifies undirected, spontaneous processes—say, a rock rolling down a hill, or water assuming the shape of a puddle—as force-driven interactions. But life does not work that way. The interactions that produce life are instead driven by information. For Roederer, these information-driven interactions represent the defining property of life, and importantly, they "would not happen (or just occur by chance) in the absence of the particular pattern at the source" (7). Philip Ball notes that "biological information and meaning do not simply arise from the bottom up (8).  Rather, we find a "specific and stronger kind of top-down causation that plays a very relevant role in biology: top-down causation by information control" (9).

Metaphysical Implications of the Genetic Code
This top-down causation is effected by DNA. But in the absence of the genetic code, DNA could not serve in this capacity, for "a pattern all by itself has no meaning or function (10). Meaning must be derived from a context, and, as Barbieri notes, "we cannot have codes without meaning or meaning without codes (11). DNA sequences, then, are rendered meaningful via the genetic code.

The many and varied molecular agents of gene expression (13) are all themselves products of gene expression: manufactured molecular artefacts in accordance with the very symbolic assignments and conventions they reify. Thus, the information in DNA is self-referencing. We might fairly compare this arrangement to a dictionary written in an unknown language. Such a dictionary can tell us what all the words mean, but we must know what they mean in order to read the dictionary.

To move past this seeming paradox, we need only recognize that in such a case, the meaning of the words originates from a transcendent perspective. A speaker of the language has written the dictionary. The dictionary may claim a certain authority, but this is all derived from its author. Similarly, the cellular translation apparatus does not primarily define the genetic code; it is merely a physical instantiation of it. The assignment of symbolic meaning requires an agency that transcends the medium of the symbol.

Symbolic meaning is enshrined within the genetic code at the core of all life, and it is by virtue of this meaning that life begets life. If genes did not mean anything, the information they contain could not be decoded, and life as we know it could not be. As humans, we are unique among all the creation, for we have the capacity to recognize symbolic meaning, to seek it out, and even to create it ourselves. The symbolic meaning we observe in the genetic code is plainly not of human origin. When we encounter such meaning, we should look upwards—in worshipful gratitude and awe—toward that One who has made us in his own image.

Lee Wimberly is an Internal Medicine physician. He has practiced hospital medicine in Birmingham, AL, for 18 years, and also serves as medical director in several post-acute care settings. He is happily married to Missi Wimberly, and they are the grateful parents of five healthy children. Lee participates on Twitter as @LeeTWimberly and blogs at https://wimberlymd.com with an emphasis on Christian apologetics and the intersection of faith and reason. His other interests include database design, photography, boating, and dogs. Lee is an ASA member.
God & Nature magazine is a publication of the American Scientific Affiliation, an international network of Christians in science: www.asa3.org