When invited to contribute to this new ASA publication, I jumped at the chance. As I see it, God & Nature will deal with issues in science and Christian faith in the "here and now," largely to help readers just beginning to grapple with them. So maybe a melange of memoirs and musings from "there and then" will provide some balance.

After getting a Ph.D. in biochemistry in 1951, I spent 20 years doing scientific research. Since then I've put in twice that many years as a writer and editor.

When I told my colleagues in the Department of Biochemistry & Biophysics at Iowa State that I was planning to leave not only the department but biochemistry itself, some of them worried about me. One said that I must have lost my mind. Another assumed that I had inherited great wealth, so I would no longer have to work for a living. That one, at least, got it wrong. 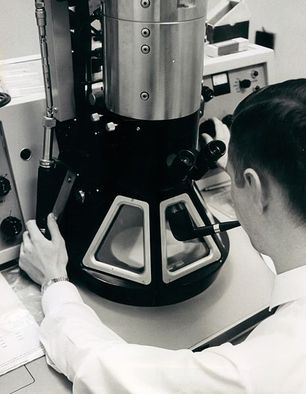 There had to be some explanation. I don't think I was regarded as a traitor to the cause, but I was definitely a defector. I wasn't pushed out. My lab was humming. In the world of "publish or perish," I may have languished somewhat but I wasn't perishing. Even back then, there was plenty of competition for good jobs in academia. To be cautious, I took a year's leave without pay, aware that stepping out of the scientific world for even a year might make getting back into it exceedingly difficult.

I wasn't dissatisfied with science, but I sensed that the Lord had something else for me to do. Then, after inhabiting a different world for a year, I made my leave permanent. I had found a new profession, with an accomplished mentor; my wife Ginny already had a broad reputation in the Christian publishing world. As a start-up free-lance editorial team, we languished at first but we didn't perish.

Actually, there was a lot of overlap between my two careers. As a scientist I had helped my own grad students learn to write more clearly. I had turned out a weekly departmental newsletter for 10 years, and in my spare time I had even tried my hand at writing poetry. Further, as an editor I didn't think of myself as having given up science entirely. The ASA newsletter I wrote for 23 years was addressed to scientists, and I've kept up by reading weekly journals that come as "perks" from long membership in two scientific societies. One is Science, the other, Chemical & Engineering News. I still read both, or at least skim their contents, every week.

In fact, until 2009 I continued to call myself a biochemist. That year I offered to help a grad student in chemistry here at U.C. Berkeley with her dissertation. Her dream was to become a professional ecologist (preferably in the great outdoors) but she had been advised to get a Ph.D. in chemistry to prepare for that career. Not bad advice, but when I met her she was completely bummed out by years of lab work that had nothing to do with ecology--and was depressed from having to write about it. Ginny and I had helped polish other dissertations by then and I was sure that my research background would be an asset. Boy, was I wrong! Her experiments (on gene regulation in a bacteriophage) were hardly recognizable to me as chemistry. I may have helped some just by asking naive questions that forced her to explain things more clearly. But since that experience, I generally refer to myself as "an ex-biochemist" or "a former scientist."

All along, I've thought about the interaction of science and Christian faith and have done quite a bit of writing and speaking about it. Eventually I put a lot of my thinking into a guidebook for graduate students, called Being a Christian in Science (IVP, 1997). It's now out of print and deserves to be, since it's also out of date--though many ideas in that book still make sense to me. One of them is how different a human enterprise can look from the outside, as compared with the view one gets as a participant. That's true of science as well as Christianity. Of all people, Christians should be most nimble at grasping a dual outlook. Remember Jesus' prayer in John 17 for those who are "in the world" yet are not "of the world" because we don't belong "to the world"?

Much of what I learned from doing scientific work has stayed with me. In a sense I'm still part of the scientific world even though I'm no longer in that world. Like other endeavors, science has its ins and outs. Am I one of them? We'll see.

Walter R. Hearn grew up in Houston and majored in chemistry at Rice University. He received a Ph.D. in biochemistry at the University of Illinois in 1951. After doing research at Yale Medical School and Baylor College of Medicine, he spent 17 years on the biochemistry faculty at Iowa State University. His research interests included peptide chemistry, hypothalamic hormones, and bacterial pigment biosynthesis. He was a Fellow and Life Member of AAAS and an Emeritus member of the American Chemical Society. In 1972 he began doing free-lance editorial work with his wife Virginia. They have edited periodicals and some 200 books, largely for Christian publishers.

Walt joined ASA while he was in grad school and served on the Council in the 1960s. From 1969 to 1993 he edited the ASA newsletter. He was a coauthor of “Teaching Science in a Climate of Controversy” (ASA, 1986) and author of “Being a Christian in Science” (IVP, 1997). His articles, reviews, and poems have appeared in Perspectives on Science & Christian Faith, God and Nature and Radix.
Walt went to be with our Lord in  2017 at the age of 91 and is sorely missed


​​
God & Nature magazine is a publication of the American Scientific Affiliation, an international network of Christians in science: www.asa3.org