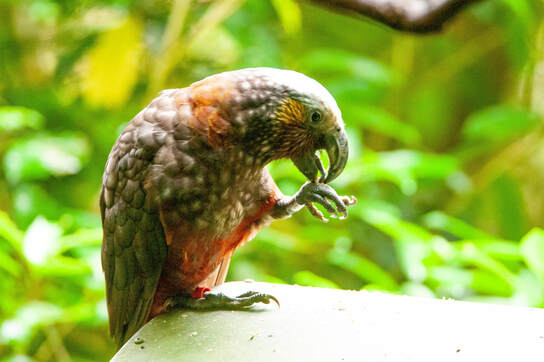 ​In March of this year, I (Janel Curry) led a group to New Zealand to encounter the unique birds of the country. The group included ASA members, friends, Gordon College faculty, staff, and students. Many years ago, I had a sabbatical to New Zealand, and my daughters and I took a New Zealand bird book with us and chose to view the unique creation of the country through the process of paying attention to the birds. I wanted my daughters to develop the skill of attentiveness to the creation because it is attentiveness that is necessary in order to practice care of creation. And since that time, I have tried to bring others to New Zealand to experience this discipline of attentiveness.
Kaka, a large species of parrot found in the native forests of New Zealand 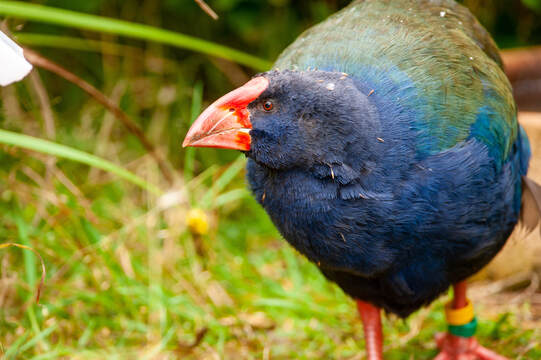 ​Birds, in this unique environment, are the lenses through which we can grow in our understanding of the notion of Shalom—humanity at peace with God and with the creation. Since there are no native mammals in New Zealand, birds are central to the natural ecology and to Maori culture. The conservation of native species is the focus of much of the ecological restoration efforts, which involve everything from pest-free islands to areas where double fences and trapping maintain some native habitat. Birds, many of the them flightless, evolved in this environment in the absence of predators. The native bush, native birds, and Maori culture are a cultural-ecological whole. The creation of pest-free zones leads to the re-establishment of native trees, or bush, which in turn allows native birds to survive.
South Island Takahe:  This flightless bird is the largest member of the rail family and is highly endangered with only around 300 left in the wild. Pest-free zones have been crucial for conserving this species. 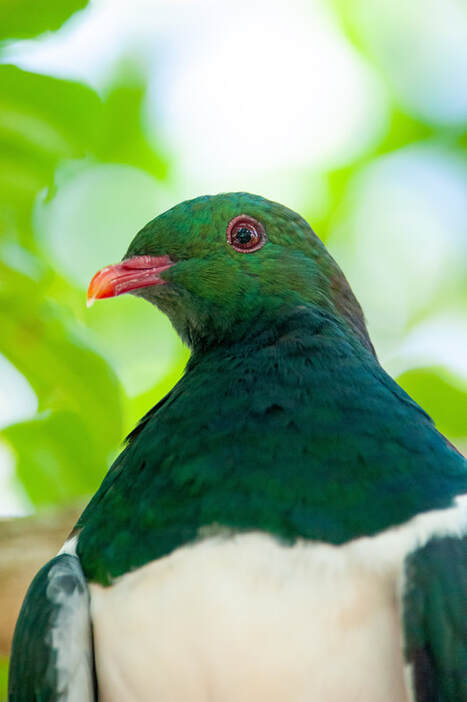 Thus, learning about birds involves understanding the larger story. For example, individual Maori communities have collective responsibility to serve as stewards over areas.  Their stewardship responsibilities extend to the entire territory and not just to the land “owned” by them. A tribe’s mana, their prestige and authority, can increase or decrease based on the success of their caretaking. The Department of Conservation works closely with these local Maori stewards. It is the communal responsibility of the tribe to work toward the flourishing of the creation.

​Our time exploring the ecology of New Zealand, learning about Maori culture, and adding to our life list of birds, led to much reflection on what this means to us as Christians.  This reflection included spending time with staff from A Rocha Aotearoa, New Zealand, a Christian conservation group. I was struck by how A Rocha was also increasing the prestige and credibility of the gospel through its work with a local community. They exhibited hope and persistence, and they built communal responsibility in their work. Would the church do well in envisioning itself as a confessing community that has stewardship responsibilities over an area where its spiritual strength increases in measure by its engagement in bringing about Shalom? I often come back to the words of Wes Jackson:
​
​“What if we employed our rivers and creeks in some ritual atonement?  Their sediment load is largely the result of agricultural practices based upon arrogance, tied in turn to an economic system based upon arrogance…but perhaps we need an annual formal observance in the spring—when the rivers are particularly muddy--a kind of ecological rite of atonement, in which we would “gather  at the river.” Maybe we should ally ourselves by virtue of a common watershed…for a watershed can and often does  cut through more than one  bioregion.  There would be nothing abstract about a common covenant among  people of a common watershed.” (1)
Kereru or New Zealand Pidgeon: The Kereru plays a crucial role in the ecology of New Zealand because it is one of few species that can ingest New Zealand native berries or fruit. They play the role of being the “seed bags” that spread the seeds of native plants. The Kereru is also known to get drunk on these fermented fruit and fall out of trees. 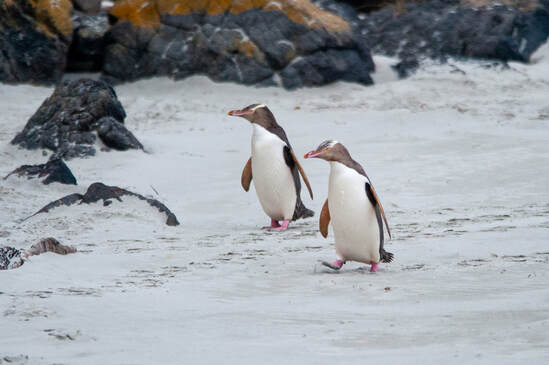 Yellow-eyed Penguins: the world’s rarest penguins with little over 5000 left in the world. Our group viewed these birds as they came in off the surf at dusk on the Otago Peninsula.

Commentary from Vicki Best, Director of Operations and Development for ASA, and a trip participant

Back in March, I had the privilege of traveling to New Zealand on an amazing birding trip co-sponsored by the ASA and Gordon College. Janel Curry, who is Gordon provost and an ASA fellow, invited the ASA to participate on a trip that she had organized to that beautiful country. On this wonderful adventure were a mix of retired ASA members and friends, Gordon science students, and both Gordon faculty and alumni.

We were blessed to see 84 different and unique species of birds, including kiwi, albatross, gannet, bittern, brown quail, and yellow-eyed penguin. In addition to spending time on both the North and South Island, we visited at least twelve different cities and towns as well as the beautiful fiords in Milford Sound. The gorgeous landscape and natural beauty there was absolutely breathtaking. In addition, we had the wonderful opportunity to meet with several ASA members and New Zealand Christians in Science members.

It was an awe-inspiring experience on many levels, but what was most meaningful to me was the intergenerational conversations and interactions that took place over the ten days we were there. That was at least partly because our New Zealand tour guide required us to sit with a different person every day on the bus and at meals. The whole team was blessed because it made for a meaningful and rich experience for both the young students and the older folks alike.
​
I had long since envisioned a trip of this sort for the ASA. Because of its success, we are definitely planning for a similar one in the near future!

Janel Curry is provost at Gordon College. Prior to Gordon, she served as dean for research and scholarship and as a faculty member at Calvin College. She has a Ph.D. in geography from the University of Minnesota and a BA from Bethel in Minnesota. She has published extensively on human-land relations and environmental policy.

Vicki L. Best received a Bachelors in Arts in Business Administration with a concentration in Accounting and Mathematics from Gordon College. She spent 16 years as the CFO for Covenant Christian Academy and is currently Treasurer at First Congregational Church of Hamilton. She also serves on the board of directors of Wazee Foundation, an organization that serves the impoverished elderly in Kenya, Africa. Vicki joined the ASA in 2012 as Financial Manager, and in 2016, she assumed her current leadership role as Director of Operations and Development.

Greg Smith is a freelance photographer with a wide range of experience. In addition to sports action photography, Greg does portrait work for individuals, families, and corporate executives. Greg's photography has helped revitalize the marketing and promotional effort for programs at Northern State University in Aberdeen, S.D., where he worked as a director of marketing. Greg recently relocated to Sioux Falls and is available for assignments in the Midwest region and nationally. For any information or questions, send an email to gsmith1644@gmail.com.


​​
God & Nature magazine is a publication of the American Scientific Affiliation, an international network of Christians in science: www.asa3.org