The stories we tell shape the world we see. We find wisdom and courage by seeking them. We find love by looking for friends and teachers rather than foes or subjects. Similarly, we find knowledge when contemplating nature by looking for relatives and allies. Even when we compete, we can choose to tell a story of hope.
Faced with coronavirus, I have been tempted to speak of warfare, to become entrenched in multiple ways. And, in my trench, I lose sight of God’s grace. Thus, I have been looking for other stories to tell, stories that allow me to advance without the other side retreating—or, better yet, to do away with “sides.”

One of my favorite hymns speaks against our warful imagination. Harry Emerson Fosdick wrote “God of Grace and God of Glory” in 1930. A Baptist pastor, he had lived through World War I, the Spanish Flu, and the Great Depression. The song mentions “hosts of evil round us” but turns to other metaphors. It reminds me to ask how I see myself: as soldier or child, as combatant or brother. The song gives me permission to think about other stories, ones that work for everyone involved, not just me. And it reminds me who the real hero must be.

Cure Thy children’s warring madness; bend our pride to Thy control;
shame our wanton, selfish gladness, rich in things and poor in soul.
Grant us wisdom, grant us courage, lest we miss Thy kingdom’s goal.

I have turned from war to stories about friendlier competition. I can strive for God’s kingdom without striving against others. The four verses of the hymn have led me through the process of reimagining the world and the pandemic as a marathon, following a common metaphor in the epistles of the New Testament. 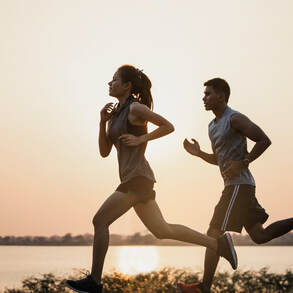 “God of Grace and God of Glory”

An important step in my search for a better narrative takes me back to a time in grad school, when grace and glory ambushed me in the Harvard Museum of Natural History. Centuries of biology haunt the building. Specimens from around the world stare out from glass cases. Skeletons of whales, mammoths, and dodos adorn the rooms alongside the remains of carnivores from the Cretaceous. Blown glass flowers and invertebrates catch the eye, a reminder of biology training from a hundred years ago. A new graduate student, I was still adjusting to working in the same building with this renowned history as well as renowned biologists, including E. O. Wilson and Stephen Jay Gould.

The decisive moment did not occur in the exhibits, but behind the scenes in the entomology collections. Millions of insects preserved in naphthalene give the rooms an overwhelming smell of mothballs. (Those of us who worked there were most disturbed by the inevitable time when our brains and noses surrendered to the smell and we stopped noticing.) I was walking to my office when a lone, live insect settled on my shoulder, its shell a brilliant emerald green. My friend Louis emerged shortly from his office to rescue us both. “I wondered where you’d gotten to.” (Or something similar—I do not recall his exact words, but I do remember him addressing my insect passenger directly.)

The creature was, to my surprise, a cockroach. My friend Louis Roth was a world-renowned expert in roach classification. His enthusiasm was contagious, and I immediately warmed to this unexpected insect. That encounter changed my relationship with nature. I discovered that an insect, even a cockroach, could be a source of wonder. Pests, weeds, and even viruses, have stories of their own.

“Lo! The hosts of evil round us”

In difficult times, war can be a tempting metaphor. It allows us to identify an enemy, rally the troops, and charge forward. And yet, the language of war can be harmful, especially when tied to religion. A history with words like “crusade” should make us pause and ask if this is really where we want to go. Christians, in particular, need other stories to tell.

The war metaphor has become popular during the pandemic. A recent example appears with a statement released by the Christian organization Biologos. The statement speaks eloquently about faith and reason coming together, and I support it. The introduction, however, gives me pause: “I wish COVID-19 had brought us together, the way World War II did. By fighting a common enemy, some of the divisions in our nation might have healed.”

How often do we turn to an external enemy in hopes that it will bring us together? As a Christian biologist, I am fascinated by our tendency to turn to a “common enemy” to promote kindness. The move is effective, but is it really altruism? Or is it rarified selfishness?

Biologists have long been interested in natural self-sacrifice. In many species, not just humans, individuals sacrifice themselves for others— relatives, neighbors, even strangers. This behavior can benefit a gene or a group, even when it harms the individual. Distinguishing between in-group and out-group, us and them, allows an organism to compete as a member of a team. I sacrifice for my team—be it family, town, or nation—so that we can defeat another team. This is “biological altruism” (short-term cost to an individual with long-term benefits for relatives), but not Christian altruism (selfless love).

As a Christian biologist, I recognize the temptation to sacrifice one neighbor for the sake of another. The war metaphor allows me to continue in fear and hatred while praising myself for helping the team. It can be terribly easy to confuse this extended egoism with true selflessness.

Others have questioned whether we are truly at war with coronavirus (in Christian Century, the Washington Post, and sociological analysis). Antagonism can spill over onto other humans, intensifying polarization and justifying harmful acts as necessary sacrifices. Minorities, foreigners, and civil servants can become the targets of our anger, seen as witting or unwitting collaborators with the enemy.

A second, subtler issue arises when we think about our theology of nature. To be at war with the virus is to be at war with nature itself. God gives aid to the enemy—creating and preserving the virus—or permits a perpetual state of hostility. This makes it hard to trust in the goodness of creation. It undercuts the profound, if sometimes puzzling, love and fascination that makes science work.

Louis Roth was enthralled by cockroaches, and, because of his friendship, I see them in a whole new way. I doubt I will ever befriend a virus, but I can no longer see a virus only as an enemy. Every creature has its own virtues, its own ends, and its own story.

I have been exploring biblical metaphors that take suffering and competition seriously without casting anyone as the enemy. Hebrews (12:1, NRSV) suggests a footrace. “Therefore, since we are surrounded by so great a cloud of witnesses, let us also lay aside every weight and the sin that clings so closely, and let us run with perseverance the race that is set before us.”

The Greek word translated as ‘race’ here means a struggle for victory. It is the root for the modern English word “agony” and describes an intense trial, not an easy or casual competition. The path and pace can be grueling, the discipline demanding. And, though there is mention of hostility, the focus remains on the crowd of witnesses (literally martyrs) who are spectators, but also, by their running, witnesses to the same discipline.

God, who organizes the race, urges runners forward, helping them grow from strength to strength. Everyone benefits, not just the winners. “Now, discipline always seems painful rather than pleasant at the time, but later it yields the peaceful fruit of righteousness to those who have been trained by it” (Heb.12:11).

Many have been tempted to view biological competition as a race in which the winner takes all, as though God punished those who fall behind. The economist Thomas Malthus famously claimed that God created scarcity to reward the diligent and punish the lazy. His story influenced generations of thinkers who view “survival of the fittest” as a moral imperative.

There are, however, serious errors in this approach, both biological and theological. Malthus reasoned from poor biology to poor theology. Species succeed in a variety of ways, including mechanisms for self-control, cooperation, and negotiation. Charles Darwin found Malthus’ views of competition provocative but never accepted his moralistic conclusions. Modern biologists favor another story, that of the Red Queen in Lewis Carroll’s Through the Looking Glass. Like the Red Queen, organisms must run constantly just to stay in the same place. Evolution has no final winners, only constant competition, cooperation, and strategy.

Personal victory can never justify holding others back, weighing them down, or setting obstacles in their way. Even if it did, Jesus has already claimed first place. We run for the sake of running and for the sake of those who run with us, even the last and least. The footrace narrative frames our suffering with movement toward Jesus and not away from (or over) our neighbors. Christians can keep our eyes on the prize by focusing on God who sets the rules (the laws of nature), Jesus who runs before us, and the goal of God’s kingdom.

“Save us from weak resignation”
​
Right now, politics, religion, and medicine have been cast as culture wars. Even the most devoted peacemakers will be tempted to speak of enemies, to transfer their grief, fear, and anger onto some antagonist. The war metaphor appears to strengthen and unite us, but it cultivates fear and anger. It tells us we are besieged and hated. And it encourages us to hate in return. Even when we push our fear and anger beyond the human race onto wilderness and nature, we still imagine ourselves as soldiers, combatants, and conquerors. We alienate ourselves from nature. I am a fan of team Homo sapiens, but ours is not the only team, and we, alone, will never be the victors. The laurel belongs to Christ.

The virus has no will of its own. To fight the virus, we must attribute ill will to God or to unseen spiritual forces. I do not doubt such forces exist, but I make a point of meeting them on my own terms and in God’s love. Hostility will not be overcome by my strength but by God’s grace and glory. “There is no fear in love, but perfect love casts out fear; for fear has to do with punishment, and whoever fears has not reached perfection in love” (I John 4:18).

Louis Roth and an unexpected cockroach were, for me, part of a great cloud of witnesses. They taught me how to seek friendship and wonder in every aspect of my life, even at the edge of my comfort, when confronted by things truly new, strange, or troubling. A scientist showed me how, and the New Testament explained why. I am not a soldier in God’s war but a runner in Jesus’ marathon.
That is the story I want to tell. It respects the very real agony of suffering and competition. It takes danger and difference seriously. It also reminds me to keep my eyes on the prize, to strive for God and not against nature. Good theology and good science do this for me—they teach me to reach out just a bit further in curiosity and in love.

Lucas Mix is project coordinator at Equipping Christian Leadership in an Age of Science (ECLAS), supporting churches and Christian leaders using the best of science and theology. Current ECLAS research focuses on the role of narratives in public theology. A writer, speaker, teacher, and Episcopalian priest, Lucas works at the intersection of biology, philosophy, and theology. He has affiliations at Harvard, the Ronin Institute, and the Society of Ordained Scientists and blogs on faith, science, and popular culture.