In 2018, the Wellcome Global Monitor (1), the “world’s largest study into how people around the world think and feel about science,” asked more than 140,000 people in more than 140 countries whether scientific findings have come into conflict with the teachings of their religion. For those surveyed in the United States, the majority of respondents—59 percent—answered yes.

For several decades now, historians of science, philosophers, and theologians have tried to make sense of this belief that science and religion are at war. This is what scholars mean when they refer to the “conflict thesis,” the idea that science and religion are fundamentally and irrevocably at “war” or in “conflict.” The conflict thesis has been used by many as a meta-narrative, an overarching view that encompasses the entire course of Western civilization. It attempts to explain how modern secular man (i.e., us) came to be.

Historians typically trace the origins of this thesis to the late nineteenth century, specifically among Anglo-American writers. For instance, many scholars point to the scientific naturalists, a Victorian coterie made up of biologist Thomas H. Huxley (1828-1895), physicist John Tyndall (1820-1893), and evolutionary philosopher Herbert Spencer (1820-1903), among others, who supposedly employed the thesis in their attempt to professionalize and secularize the sciences. More precisely still, most scholars see New York University chemist John William Draper (1811-1882) and historian and first president of Cornell University Andrew Dickson White (1832-1918) as co-founders of a philosophy of history that has promulgated the belief that science and religion have been and always will be at odds. 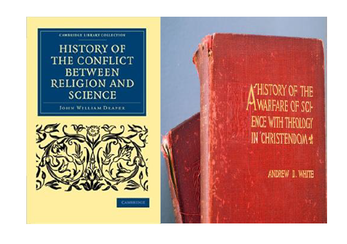 There is a great deal of truth here. Indeed, Huxley once declared that “extinguished theologians lie about the cradle of every science as the strangled snakes beside that of Hercules.” He believed that history demonstrated that “whenever science and orthodoxy have been fairly opposed, the latter has been forced to retire from the lists, bleeding and crushed if not annihilated; scotched, if not slain.” The historical record proved, he asserted, that as natural knowledge increased, belief in the supernatural decreased. According to Huxley, no one should “imagine he is, or can be, both a true son of the Church and a loyal soldier of science.”

Similarly, Draper, who published a book in 1874 entitled History of the Conflict between Religion and Science, claimed that the history of science was “a narrative of conflict of two contending powers.” He believed that faith in its nature is “unchangeable, stationary,” whereas science is “progressive.” White, who published the massive, two-volume History of the Warfare of Science with Theology in Christendom in 1896, also spoke of the “battle-fields of science,” contending that history reveals the “great sacred struggle for the liberty of science.”

But most of us know that historical movements can rarely be explained in such simplistic terms. In the last few decades, especially, historians have scrutinized the narratives of Draper and White and found them completely wanting. They have rightly debunked many of the “myths” about science and religion.

To a certain extent, however, these historians of science themselves are guilty of mythologization. While it is true that there are many “myths” about the conflict between religion and science, the idea that the nineteenth century witnessed the inception of the “conflict thesis” is not entirely accurate either. What is more, we are only now beginning to recognize that many of the accused did not, in fact, envision a conflict between science and religion at all. The reason why scholars have been incorrect about the provenance of the “conflict thesis” is itself a complicated story—here I will make just a few observations.

First, many historians of science are neither historians of religion nor historians of theology. What is often missed in their discussions of Draper and White is an appreciation of the wider religious context in which such historical narratives appeared. Advances in natural science and biblical historical scholarship seemed to many a direct assault on orthodox Christian belief. And for good reasons, for many of those who embraced new understandings of nature and the Bible also rejected classical Christian beliefs.

Debates about the character of religion, both inside and outside the church, had been raging since the Protestant Reformation, and out of these debates emerged new ways of thinking about God, the nature of Christianity, and the historical Jesus, particularly during the long nineteenth century.

Secondly, this new expression of Christianity was deeply contested. The stakes could not have been higher. Indeed, many men and women in the nineteenth century believed that the reconciliation of science and religion depended on it. Significantly, those who promoted a more diffusive version of Christianity at the end of the century turned “theology” into a pejorative. By contrasting the idea of free, progressive scientific inquiry with the authoritative, reactionary methods of theology, many intellectuals imagined dogma, not faith, as the obstacle of modern thought. Thus “conflict” occurred, they believed, not between scientific truth and religious truth, but between contesting theological traditions.

The scientific naturalists Huxley, Tyndall, Spencer, and the even Draper and White, all made such a distinction between theology and religion. What enabled them to make such distinctions, again, were the changes in religious thought that occurred during the previous centuries. Draper, for example, argued in his History of the Intellectual Development of Europe, which was published in 1863, that Christianity had been “paganized” under Emperor Constantine. In his view, the intellectual history of Europe is largely a story of the corruption of Christianity. In fact, Draper believed that early Christianity was a gift of God, whereas ecclesiastical organizations, or institutionalized religion, were the products of human invention. By the fourteenth century, he complained, “God had altogether disappeared” from organized religion. With the paganization of Christianity, however, came what Draper called the “tyranny of theology over thought.” He declared that those “who had known what religion was in the apostolic days, might look with boundless surprise on what was now ingrafted upon it, and was passing under its name.” Even his notorious History of the Conflict, under closer inspection, continues to make such distinctions, as when Draper argues that he would only consider the “orthodox” or “extremist” position, and not the moderate ones.

White shared much of the same sentiments. By separating religion from theology, White was able to denounce that the “most mistaken of all mistaken ideas” was the “conviction that religion and science are enemies.” While science has conquered “dogmatic theology,” he argued, it will “go hand in hand with Religion.” For White, science was an aid to religion, encouraging its “steady evolution” into more purified forms. White also believed that Jesus had preached a “pure and undefiled religion,” and that the present conflict “was the fault of that short-sighted linking of theological dogmas to scriptural text which, in utter defiance of the words and works of the Blessed Founder of Christianity, narrow-minded, loud-voiced men are prone to substitute for religion.” Later in his Autobiography, White concluded that history had demonstrated that “while the simple religion of the Blessed Founder of Christianity has gone on through the ages producing the noblest growths of faith, hope, and charity, many of the beliefs insisted upon within the church as necessary to salvation were survivals of primeval superstition, or evolved in obedience to pagan environment or Jewish habits of thought or Greek metaphysics or medieval interpolations in our sacred books.”

In short, Draper and White did not see the conflict as one between science and religion but between “dogmatic theology and science.” Indeed, they believed that theology was not only in conflict with science but also with religion. They envisaged the conflict as one between conservative and liberal theological traditions. This history, in other words, is one in which one theological tradition was pitted against another—a more progressive, liberal, and diffusive Christianity against a more traditional, conservative, and orthodox Christianity.

Finally, upon deeper reflection, this conflict predated the nineteenth century. Such narratives of theological conflict appeared in Protestant historiography as early as the seventeenth century, among Anglo-American Protestants in particular. As far back as the sixteenth century, Protestant reformers used a rhetoric of history, reason, and natural philosophy in their attack on the Catholic Church. But this history of polemic also demonstrates that these rhetorical strategies quickly backfired. By the eighteenth century, more liberal Protestants used the same polemic of history, reason, and science against their orthodox opponents. In time, then, such polemics were transformed from Protestant anti-Catholic sentiment to an intra-Protestant self-critique, particularly between liberal and conservative Protestants.

Nourished in this religious context, by the mid-nineteenth century narratives of conflict between “science and religion” were largely deployed between contending theological schools of thought. It was not until the end of the nineteenth century and the beginning of the twentieth century that these narratives were appropriated by secularists, freethinkers, and atheists as weapons against all religion. In short, the origins, development, and popularization of the “conflict thesis” was in part an unintended consequence of liberal Protestant thought.

Thus, the notion that science and religion are inherently at war with one another did not emerge from secular society but from conflicting religious traditions. Having a more accurate understanding of the origins, development, and popularization of the “conflict thesis” as one that originated within contending religious traditions will give us a better understanding not only of how it developed but also why it continues to persist despite decades of scholarship telling us it is false.