Personal Introduction: In 2009 I wrote a paper for PSCF that described in some detail the way antibodies are produced to fight disease in our bodies, and the long history of this discovery. The part that was hard for scientists to understand was how on earth we can make so many different antibodies—at least one for literally every pathogen or disease our body comes into contact with. Antibodies are the proteins produced by a specific kind of cell in our immune system. Their major job is to bind tightly to pathogens and inactivate them. In this blog post, I will boil this down for easier digestion. I never cease to be amazed by this system, and I hope to share some of my enthusiasm.

Our bodies are continually exposed to a world of diverse viruses and bacteria, which, if not for a well-functioning immune system, would certainly result in our quick demise. How is it that our immune system is able to make antibodies that are able to recognize these foreign and unfamiliar invaders? As we all know, the flu virus changes every year, yet we are able to (most of the time) produce the necessary highly precise antibodies that bind to the NEW version of the flu, which arose in a distant part of the world, when we get our annual vaccine. 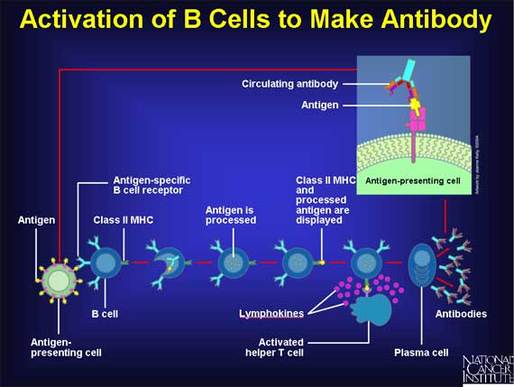 There are two possible options to explain how we can recognize such a diverse world of antigenic invaders:

1. We are born with a huge stockpile of ready-made antibody genes in our DNA, or

Formally, option one is a problem, since the amount of DNA required to encode the diversity observed is on the order of half of the total amount of our DNA in our genome. This seemed unlikely back in the 1970’s, based on gut feelings alone, but with new knowledge that only a small fraction of our genome (about 1%) encodes protein, option one is entirely ruled out. The second option also raises a problem, since it reverses the normal way genes work. Creating new genes as needed would violate the “central dogma” of information flow, as it has been understood in biology since the discovery of DNA and the protein encoding and production system. It would be quite unprecedented for an environmental stimulus to somehow cause a gene to be newly created. Through what mechanism could the protein information (shape of a virus for example) be reaching back to alter the DNA sequence, allowing a new antibody to be made that recognizes the shape of that virus? Yet that seems to be what happens. Normally, the genes we inherit encode the information needed to make particular proteins, and the genes are activated as needed. In option two, the information is not present in the DNA, and an environmental factor leads to the production of an appropriate antibody protein. If option two is true, again, what genetic mechanism could possibly generate a seemingly infinite amount of diversity?

To cut to the chase: Option two did turn out to be true. New, never-before seen genes are, in fact, continually created by the antibody producing cells, and this allows us to fight off a large variety of invaders. But how?? The answer to this has a lot to say about the amazing cleverness of God’s creation. It also shows how randomness is a truly essential aspect of how God’s creation works. Randomness is not something that should be associated with chaos, disorder, and purposelessness. For without randomness, our immune systems would cease to work. Randomness, which here means extreme unpredictability, due to the large numbers of events involved, practically guarantees that we will be able to respond to our environment by making the specific antibody needed.

Historically, in lab mice, it was known that antibodies could even be made against molecules made in the lab, never seen in nature. How this is accomplished was a huge mystery for a long time. Some scientists speculated that the molecules were “feeding back” information to cells to allow production of well-fitting antibodies (template theories). This idea was largely quashed upon the discovery of DNA and the system of protein encoding which does not allow the environment to send information back to the DNA. “Information flows in one direction from DNA or RNA to Protein” became the central dogma of biology, and is still true today. (1)

Later, scientists learned that B cells produced just one kind of antibody for each B cell clone isolated (a clone is one cell and its progeny). Next, a close look at the antibody-encoding part of the DNA showed that each B-cell clone had different genomic DNA in this region. This was such a surprise that it earned a Nobel Prize for Susumu Tonegawa, in 1987. The mystery of how so many diverse antibodies were produced became clearer once scientists began to compare the DNA of mature antibody-producing cells with that of the DNA in non-B cells (also called germline DNA, the DNA in our sperm and eggs, or liver, muscle or other body cells). In every case, B cells had rearranged DNA in the antibody region, when compared to germline DNA.

Years of study have shone much light on the process leading to antibody gene rearrangement. The essential features are as follows:

1. Specific DNA rearranging proteins are made only in B cells (RAG proteins) (2)

2. The process of rearrangement involves cutting the DNA and then re-joining together distinct segments

3. There are many (hundreds) of such segments that can be joined together

4. The process of cutting and rejoining DNA is purposefully “messy” involving a large degree of imprecision at the junctions through multiple independent mechanisms

5. Not all DNA rearrangements will result in an antibody being made, but a B cell has two chances to get it right, one chance on each chromosome (one from mom, one from dad).

Now that a newly developing B cell has rearranged its DNA to make a new antibody, that cell has to pass two tests. The first test is whether or not it makes a protein at all. In #5 above, if both chances fail to successfully produce a viable protein, the cell will die. However, if the cell does manage to produce antibody, the antibody is then displayed on the cell surface. The second test then begins. If the new B cell’s antibody binds tightly to something at this point, it also dies by suicide, for binding to self would lead to production of antibodies against your own tissues—a very bad thing. If the cell passes test one (making an antibody) and test two (not binding self) it is then released from the nursery of the bone marrow out into to the bloodstream, where it will basically do NOTHING until it does encounter something it binds to, which, by definition is something foreign to the body. In a few weeks, if it encounters no action, it will die, to be replaced by another newborn naïve B cell emerging from the bone marrow, with a different, random specificity.

In this way, we create a hugely diverse pool of antibodies. Our bodies make enough new specificities every day (multiple millions) such that any single pathogen is extremely likely to be detected by at least one, and usually several different clones of B cells. When those cells bind to a foreign invader by their surface-displayed antibody proteins, they then go into production mode, dividing and becoming more numerous (clonal expansion) but also secreting antibody protein into the blood and body fluids.

Were it not for the random system of generating the huge pool of variation, the system would not work.


(1) The central dogma is sometimes stated as DNA makes RNA makes Protein, which is actually not quite right. More properly understood it is the concept that the information (encoding) in nucleic acids (RNA or DNA) flows toward making a protein, and never the reverse. This was Francis Crick’s conception of information flow. If one understands how ribosomes, the protein making machines, work, one can see this has to be true.

(2) T cells, another type of lymphocyte of the immune system, also do a very similar kind of rearrangement, and the same principles apply. RAG stands for “Recombination-Activating Gene”

Craig Story is Professor of Biology at Gordon College, where he teaches a number of cell biology courses including immunology and biochemistry, and serves as the health professions advisor. He studied antibody transport in pregnancy for his doctoral research at Brandeis University, and in his postdoctoral training at MIT and Harvard Medical School he worked on an unusual virus immune evasion process. Since 2013, Dr. Story has worked with church leaders, seminary professors, and the public to foster important conversations about science and the Christian faith.