I wrote this poem after spending several years hiking or running past this stone formation near my home in Salt Lake City.  The formation has always been moving to me, likely because I can get close to it and touch it.  I would like to thank my friend and fellow ASA member, Robert Thoelen, for his helpful edits.
​ 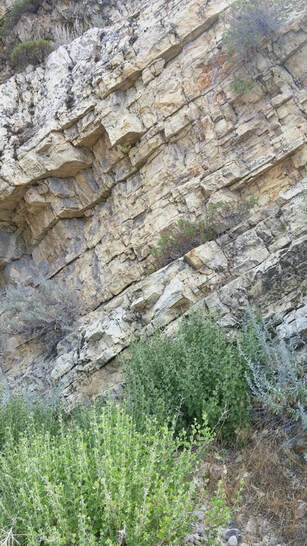 There is a column of grand design near my home.
It has columns that turn in unreal ways with seismic grace
and grains of ancient mud and sand.
It is common for me to stop and admire this formation.
I touch its walls, look in its crevices, and imagine what has happened here.
Transformed, an ancient sea appears with plesiosaurs and mosasaurs.  Humid.
It is warm, and duckbilled dinosaurs, horned dinosaurs, and even our own distant tiny relatives make use of the rivers draining into it.  Where are they now?  Dust.
Ages pass.  The land, where my house now sits, rises.
The air cools.  A long-vanished glacier digs out the canyons around me and…
A lake appears, disappears, reappears more times than we will ever know.
Its water was higher than from where I now stand.  Fish would have been here.  I would recognize them, probably.
Mammoths, camels, horses, saber tooth cats.   Where are they now?  Dust.
The land warms, the lake drains, and salinity returns to the waters but in a different way than before.
It becomes the Great Salt Lake or my own version of the Dead Sea.
It is a sanctuary.  Birds of countless species use it as a resting spot for millennia of migrations.
And the people come.
First the ancient ones, the Anasazi, but I can imagine nomads even earlier.
Utes, Goshutes, Shosone, Navajo to follow.
Then Mormon pioneers. Then my family comes, in less than a blink of an eye.
A large metroplex of concrete, steel, and glass is formed, and we think it will stand forever.
But it will become dust as well.
God, I can’t fathom Your magnitude and Your glory.
You are infinite, eternal, unchanging,
But You allow the world to change to reflect You.
And You came into our world as well, to demonstrate an even deeper mystery.
I stand before the column, profoundly humbled, terrified, and amazed.
Crumbling, rising, shaking, turning.  It is a marker of time, a magnificent clock of                                                                                                  which I am but a second and gone.
I turn to dust but then awaken to approach this art again.

John F. Pohl MD is a professor of pediatrics and a pediatric gastroenterologist at Primary Children’s Hospital (University of Utah) in Salt Lake City, Utah. You can follow John at @Jfpohl on Twitter.
God & Nature magazine is a publication of the American Scientific Affiliation, an international network of Christians in science: www.asa3.org