Famous scientists love to speculate about the ultimate questions of life in our universe.  According to quantum physicist Steven Weinberg, “The final laws of nature, the book of rules that govern all natural phenomena are utterly impersonal and quite without any special role for life.”  The renowned paleontologist Steven Jay Gould claimed that “any replay would lead evolution down a pathway radically different from the road actually taken.”  Other scientists though, noting the remarkable fine-tuning of our universe, have come to different conclusions: “Far from its myriad of products being fortuitous and accidental, evolution is remarkably predictable” (Conway Morris, 2010).  What are we to make of these statements?  For such big questions, must we be content with the opinions of scientists who make reasoned arguments that extend far beyond their main fields of research?

Fortunately, the field of astrobiology has developed methodical and quantitative approaches to these questions.  This discipline formulates testable hypotheses relating to the origins of life, how it has evolved from its earliest stages, and the relative contributions of chance versus necessity in shaping its fundamental properties.  Explaining the nature of the cosmos is not just a task for physicists—since life has been present for almost one-third of the existence of the universe, biology is not a minor detail.  Moreover, life has a dramatic impact on the physical world, radically changing both our atmosphere and the geology of our planet.  Astrobiologists aim to situate physics, chemistry, and biology in a larger context that enables us to better understand how life emerged on this planet and how it might look elsewhere in our vast universe. 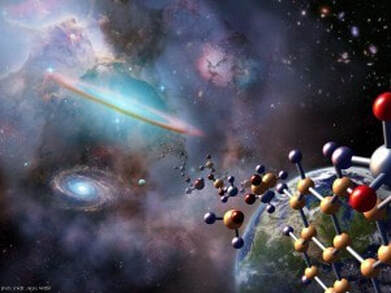 One of these scientists is ASA member Stephen Freeland, currently managing a research team at the University of Hawaii NASA Astrobiology Institute under the leadership of Dr. Karen Meech.  Since astrobiology is highly interdisciplinary, Steve’s broad academic background is well-suited for this field: a bachelor’s degree in zoology from Oxford, a master’s in biological computation from York University, and a doctorate in genetics from Cambridge.   Research questions, not academic disciplines, have driven Steve’s studies, and he has found astrobiology conducive to his primary interests: “To what degree is life on Earth a result of chance?  Also, could the development of life be a repeatable process that takes place elsewhere in the universe?”

Steve’s current research explores the evolution of amino acids—the building blocks of proteins—that are essential to life on our planet.  Almost universally, regardless of which species one investigates, an organism’s genes code for precisely 20 different amino acids.  These same 20 are assembled into countless different proteins that enable various life-forms to grow and thrive, whether in a boiling pool of acid or a frozen arctic wasteland. Given the remarkable diversity of life that exists, this fundamental uniformity is a remarkable fact and compelling evidence for a shared historical lineage. But astrobiologists are also eager to understand why genetic material  codes for a precise set of 20 amino acids, not fewer or more (aside from a few unusual species that have evolved more recently to code for 22). For example, from simulations of a pre-biological world and careful analyses of meteorites, current evidence suggests that many other amino acids were available to the origin of life on Earth, and indeed throughout the galaxy.  Apparently the earliest life forms coded for only half of the current “alphabet” of 20 amino acids, a small sub-set of what was available.  Biological evolution then created the rest of its own alphabet, ignoring many of the amino acids already produced by the non-living universe.

Is the resulting set of 20 largely the result of chance (as Stephen Jay Gould’s argument implied), or is it an optimal set of building blocks for carbon-based life forms?   If life has arisen elsewhere, would it employ different amino acids from the ones we observe here?   To what extent do the laws of physics and chemistry restrict alternatives, pointing life in a particular direction?  Knowing answers to such questions is important for astrobiologists as they search for evidence of life outside our planet.  This knowledge would also be of immense value to synthetic biologists as they create genes coding for new proteins never observed in nature.

Beyond Steve’s exciting research field, his personal background is also noteworthy.  As someone who explores the origin of life, he is very attentive to the question of God.  His father was a Methodist minister, and as Steve grew, his curiosity propelled him to examine other faith traditions.  In his teenage years, he was briefly involved with a fundamentalist Protestant community, and as an adult, he is now a practicing Anglican.  Though public perception suggests that science and Christianity are incompatible, Steve’s actual experience has been different: in his research, he has encountered a fair number of other believers, often by bumping into them at church!
​
In academia, like most other career fields, the vast majority of conversations between scientists are strictly professional.  But in getting to know some of his colleagues more personally, Steve estimates that about three-quarters of them have some interest in spiritual issues, and they are aware of his convictions.  On the other hand, Steve’s undergrads perceived him quite differently.  Because he has primarily taught courses in ecology, evolution, and genetics, many students simply assumed that Steve could not possibly be a Christian.  Fortunately, while teaching at the University of Maryland, Baltimore County (UMBC), he was assigned a course entitled “Science versus religion: the battlefield of evolution.” From the start, he rejected the assumption that science and religion are inherently opposed.  As Steve taught from 2003 to 2009, he renamed the syllabus “Questions are the Answers” and reshaped its contents accordingly.   This change reflected his growing conviction that only by encouraging students to take an inquiry-based approach would they formulate the kind of questions that can enrich and shape their understanding both of God and nature.
When asked about the greatest objections to Christianity in a scientific world, Steve responded that it is not the question of life’s origins, but the problem of evil that is most challenging.  Accounting for moral and natural evil in our world has engaged Judeo-Christian scholars through history, not just since the advent of modern science.  As Steve strives for greater understanding in both his professional and personal journey, he is confident that continuing to ask questions is the key to unlocking life’s mysteries.


Thomas Burnett is the Assistant Director of Public Engagement at the John Templeton Foundation. He is responsible for identifying thought-provoking, under-appreciated, and potentially beneficial findings from recent research initiatives in order to enhance public engagement with “Science and the Big Questions.” Before joining the Foundation, Thomas worked in communications at the National Academy of Sciences. Prior to that, he worked for BioLogos and the AAAS Dialogue on Science, Ethics, and Religion. He also served as a Rotary Ambassadorial Scholar in Innsbruck, Austria. Mr. Burnett received his B.A. in philosophy from Rice University and pursued his doctoral studies in the history of science at University of California, Berkeley.