I had landed at Heathrow on the morning of 13 October 2012. As I stepped out of the airport building to wait for the coach to Nottingham, I felt the brush of the cold breeze on my face. After a lot of waiting and worry, I was finally in the United Kingdom.

One late night back in September, Martin, an old friend with whom I had lost touch for about a decade, called me out of the blues. We had lived together in my apartment in Benin City, Nigeria, during our national youth service, before his sojourn to the United Kingdom for his masters and PhD studies at the University of Nottingham. I still don’t understand what prompted him to reach out when he did (I have never asked)—could it have been a coincidence, or God orchestrating events according to the counsel of His will (Ephesians 2:6)?

On the night Martin called, I hinted that I’d gained admission for an MSc at Nottingham and was awaiting the approval of my student visa by the British High Commission in Abuja, the capital city of Nigeria. He was surprised that I was still in Nigeria while lectures had already commenced at Nottingham Uni; he called in regularly to check on the status of the visa application. As soon as the visa was approved, on Thursday, the 11 of October, Martin urged me to leave Nigeria immediately, warning that I could be turned back by the officials of the UK Border Agency at Heathrow for “late resumption”. A professor and mentor whom I worked with graciously paid for my ticket so I could leave the next day. Till today, I don’t know how much he spent; it was a gift from him! 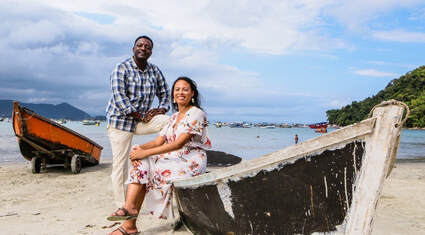 Unknown to me, Martin had paid twenty pounds for my coach ride from Heathrow to Nottingham and arranged for his friend to pick me up at the coach station in Nottingham. This kind friend took me to his house, where I freshened up and had a sumptuous lunch and dinner, and he provided a room for me to rest my head for the night. Being treated kindly by a stranger in a foreign land reminds me of the words of Jesus Christ about being charitable to strangers (Matt 25:35).

On the morning of Monday the 14 of October, Martin drove me down to the University of Nottingham so I could beat the 12 noon cut-off point to register for the session (semester), which had begun almost a month back. I felt a load of weight lift off my heart when I received my student ID card signalling the successful completion of my registration.

While checking out adverts for accommodations posted on a notice board on campus, a complete stranger, Mr Lush, offered to help me check out some of the properties. He picked me up the next day and we drove around Nottingham to see the apartments of interest, but none of them met my expectations. Since my temporary accommodation (provided by Martin’s friend) was far away from the campus, Lush offered to host me at his apartment till I was able to get my own place; his apartment was about a ten-minute walk to Jubilee Campus, where I had my classes. Lush would soon find a vacant room within his residential apartment complex; he helped me negotiate the terms and conditions for the rental and stood in as my guarantor. Imagine serving as a surety for a stranger you have met by chance, without worrying about possible consequences! I’d later find out that he is a Christian and believer in Jesus Christ.

After settling and acclimatizing to the UK environment, it dawned on me that I’d just moved to an overly secular society. Even though Nigeria had been evangelized by missionaries from Britain and the Republic of Ireland in the 20th century, and there are still a spattering of Euro-American missionaries in some parts of Nigeria, church-going Christians today are a minority in the UK. The secular nature of UK life came as a sort of cultural shock for me, especially when I saw old cathedrals that seem to have lost their allure and glory and were used for seemingly non-sacred activities because the new generation of congregants has turned elsewhere. Having grappled with agnosticism bordering on atheism in my late teens and undergraduate years in Nigeria, England’s secularism reminded me of my past.

As a teenager growing up in the Southeast of Nigeria during the pre-internet and mobile phone era, my curiosity led me to read voraciously to understand the world outside my village. I was hooked to the news and features from international shortwave stations such as BBC, Voice of America (VOA), Deutsche Welle, and Radio France International, amongst others.

I’d served as an Altar Boy in my local parish from the age of ten. I had even fantasied about joining a monastery in Rome to live out the contemplative life of monks! It was through a VOA feature program that I got to know about Sigmund Freud and his psychoanalytical theory, which I found fascinating as a teenager. By my late teens, I had begun to question the tenets of the Christian faith that were passed to me as a child; and then, through exposure to philosophical texts and scientific thinking as an undergraduate living thousand of kilometres away from my village, my worldview changed. I embraced rationalism as a way of life anchored on the materialism of science. Understanding that the real world is shaped by social constructs, I came to the concept of no moral absolutes, and that makes one not amenable to accepting the veracity of religious texts. I saw the Bible as a collection of Jewish myths and ancient practices which had no relevance to modern society. Having accepted the Big Bang Theory and Evolutionary Theory as plausible and reasonable explanations of the origin of the universe and the species, I eventually turned my back on my childhood faith and began to question the existence of God.

More exactly, I was conflicted. I still saw some utility in the Christian experience as I observed changes in some of my classmates whose lifestyles completely transformed following their embrace of the Christian faith. I decided to look deeper into the claims of Christianity, starting with examing if there truly was a historical Jesus that once walked on the roads of Palestine in the first century AD. My journey and search for answers lasted for a few years, and by the time I was graduating from Bayero University in Kano in 1996, I had become convinced about the existence of God and had joined the Nigerian affiliate of the International Fellowship of Evangelical Students (IFES). With the rise of Evangelicalism and Pentecostalism in Nigeria in the 1990s and 2000s, secularism was not a threat to my faith, except for some areas of doubt that lingered.

So when I moved to the UK over a decade later and was confronted by a predominantly secular and atheistic culture, it was imperative to protect the faith I had nurtured over the years. Since I needed to surround myself with Bible-believing contemporaries, I joined Nottingham’s Graduate Christian Fellowship, and we held weekly Bible study meetings. But this was not enough.

I was elated when I found out about the Christians in Science (CiS) UK, and I joyfully attended the students’ conference (1) at Birmingham in March 2013. The theme was “Science and Christianity: The View Inwards, Upwards and Outwards”. For someone like me who is fascinated by the human brain, Dr Stuart Judge’s talk on “Developing a Christian Mind” hit a special note as he drew lessons and insights from his neuroscience background to make his point. Dr Ross Williams’ talk on “Science, Awe, Wonder and Worship” made me see how science and faith rhythmically shaped the lives of scientists who see science as a pillar that strengthen their faith in God. The more they research and study the universe, the more they see order orchestrated by the Creator, who set out the universe and created man in His own image and likeness. Dr Sharon Dirckx from the Oxford Centre for Christian Apologetics shared the experience of how she veered into apologetics having worked as a research scientist. I was really fascinated by the stories shared by Prof Mike Clifford from the Engineering Department of the University of Nottingham, who spoke about “Serving God in Science and Engineering”, using his experience in deploying his engineering knowledge and skills to provide practical solutions to human problems in some communities in Ghana.

The conference exceeded my expectations, and I went back to Nottingham feeling very fulfilled, with my faith strengthened, but without realizing that in addition to all those good things, I had also met my future wife there. Ligia had attended the conference in Birmingham as a doctoral research student at the Chemistry Department of the University of Nottingham. We had exchanged pleasantries during one of the tea breaks and would run into each other over the summer on campus, shortly after she had also attended the Science and Religion course offered by The Faraday Institute for Science and Religion at Cambridge.

At the Birmingham students conference, we were the only participants of African descent; she is Afro-Brazilian. Our mutual interests in Christian apologetics helped the friendship blossom and grow over time. Ligia and I would later attend together the CiS Conference, which was held at the University of Southampton on 30th November of 2013, where we again were the only two participants of African descent; another coincidence of sorts.

Although we both returned to our respective home countries after our programs, we remained in touch and weathered the storms that came along our way. Ligia is actively involved in the teaching ministry of her local church in Santo André and played a critical role as one of the pioneer members who worked tirelessly to establish the Brazilian Association of Christians in Science, which maintains a close collaboration with CiS UK, amongst others. I have been active in my local church while working as a public health specialist supporting the Government of Nigeria to tackle public health policy and systems challenges.
​
Despite being separated by the Atlantic Ocean, our love and mutual interests in apologetics helped us triumph over cultural and geographic barriers, and we became husband and wife; a possibility that never crossed our minds when we first met at the CiS students conference. It may have looked like a mere coincidence, but we are certain that God worked in wondrous ways to bring us together through CiS UK. Our desire as a couple is to continue to serve God and leverage our knowledge of science to strengthen our faith and ministry!

Felix Abrahams Obi is a physiotherapist and public health expert who holds an MSc in Psychology and Health. As a Senior Program Manager with the Nigeria Office of Results for Development (R4D), Felix supports the Government of Nigeria to design and implement programs towards achieving universal health coverage.
God & Nature magazine is a publication of the American Scientific Affiliation, an international network of Christians in science: www.asa3.org