Have this mind among yourselves, which is yours in Christ Jesus, who, though He was in the form of God, did not count equality with God a thing to be grasped, but emptied Himself, by taking the form of a servant, being born in the likeness of men. And being found in human form, He humbled Himself by becoming obedient even to the point of death, even death on a cross. (Philippians 2:5-8)

Humus and humility
While reading Suffering and God by Alister McGrath (an excellent book!) for another research project, I was both surprised and fascinated to learn that the root word for humility is humus. Humus, or soil organic matter, is one of a soil scientist’s favorite topics because of how important it is to soil properties. Needless to say, this soil scientist really perked up to hear what Dr. McGrath had to say next! And a little later, while ruminating on this idea (because that’s what farm girls do), I thought of the saying that humility is the root of all virtues, while pride is the root of all evil. These thoughts then exploded in my head and heart in a brand-new picture of the O horizon in a soil profile because the O horizon is a soil layer naturally very rich in humus. I was reminded of the verses in Philippians 2:5-8 quoted above. 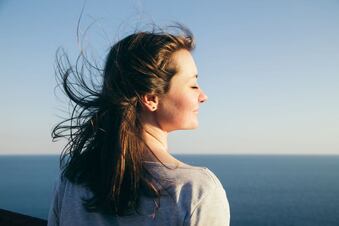 A soil profile is a vertical cross-section of soil from the top (or what we commonly call the ground) in a cut reaching down to the parent material from which the soil formed. This cross-section is comprised of multiple soil horizons; that is, horizontal layers parallel to the soil’s surface that are distinct from each other due to physical differences in soil color, texture, structure, composition, and other classifiers. Normally, the uppermost soil horizon in a soil profile is the O (organic) horizon, also called the humus layer. Humus is Latin for earth or soil (1).

The absence of an O horizon in a soil profile greatly affects the current and future productivity of a soil since the humus layer is composed of decaying organic matter (plant, animal, or microbial in origin) in association with the inorganic soil particles (sand, silt, clay) that come from the soil’s parent material(s). Because of the organic matter, the humus layer is usually very dark in color, soft in texture, and fertile in nutrient supply and other characteristics promoting crop productivity, even though it’s normally only 3-6% of a soil’s total composition. This 3-6% can make all the difference in whether a soil is able to provide for the needs of a crop, while impacting nearly every variable affecting overall crop growth and productivity.

The humus layer is also distinctive as the only soil horizon that humans can directly influence for productivity by the addition of organic matter such as manure and compost. Such inputs increase organic matter levels in the humus layer and thus improve nutrient and water availability, drainage, rooting potentials, pH, buffering, and many other crucial variables for crop growth.

Having said all that, here’s the picture I’m seeing in this relationship of humility, Scripture, the O horizon, and the life of a Christian. Just as a soil with a deep O layer can support many different purposes, be it crop production, building and road foundations, water filtration, and/or wildlife habitat, a life rich in humility is fertile ground for whatever task or purpose God deems best. In contrast, without humility, the life of a Christian is poor soil for the growth of the fruit of the Spirit (see Galatians 5:22-23) because humility is necessary for the hundredfold harvest of Matthew 13. The absence of humility makes hearts hard from pride, dry in love, and lacking the strength of joy–not the kind of soil receptive to seed germination and growth (Matthew 13).

One intriguing idea about humus is that the smallest and most indistinguishable portion of humus is the most active and usually the most influential on soil properties. As soil organic matter decays into smaller and smaller pieces and looks less and less like the plant, animal, or microbe that it once was, its surface area grows, thereby increasing the soil’s nutrient exchange, pH buffering, and water storage abilities.  Thus, the smaller the humus particles, the more important they are when it comes to the life-giving potential of a soil. This reminds me of John 3:30: He must increase, but I must decrease. The most active, useful, and effective portion of soil organic matter is that which is the most decayed (or decreased), and the same holds true for me as an obedient Christian. The less that is present of me, the more is seen of Christ. In the decreasing of me, in the death of my pride and the decay of discontent, humility grows and displays Jesus alive in me (Colossians 3:12). When we model Christ’s example to us in Philippians 2, true life can flourish as in Matthew 23:12: Whoever exalts himself will be humbled, and whoever humbles himself will be exalted.

Just as Adam was formed from the dust of the earth (Genesis 2:7) and named after the soil from which God made him (adamah is Hebrew for “fertile earth”), the presence (or absence) of humility reflects my relationship to Christ, who is the second Adam as seen in Romans 5:14 and 1 Corinthians 15:22 (2). My heart’s soil is a “fertile earth” only if it is rich in humility, which makes me receptive and obedient to the work of Christ in my life for His glory and the good of His people. A good soil is rich in humus just as a good heart is abundant in humility. Hearts rich in humility respond to the leading of Christ as the adamah seen in Hebrews 6:7: Land that drinks in the rain often falling upon it and that produces a crop useful to those for whom it is farmed receives the blessing of God (NIV); and Mark 4:20: Others, like seed sown on good soil, hear the word, accept it, and produce a crop—some thirty, some sixty, some a hundred times what was sown (NIV).
I want to be a good soil scientist who yearns for fertile soil in my garden and yard but , most importantly, in my heart. I want a humble heart that will truly be adamah for bearing that hundredfold harvest sown by the Master. And in that harvest, may more people know the Gospel and likewise bear fruit in their own lives so even more can know the truth of Psalm 34:8: Oh, taste and see that the Lord is good! Blessed is the man who takes refuge in Him.

Bible quotes are from the English Standard Version except where otherwise indicated.

Beth Madison, PhD in Soil Microbiology, Kansas State University, dearly loves Jesus and the amazing world under her feet and writes about such at soulscientistblog.com when she's not being a wife, mother, or associate professor of sciences at Union University.
God & Nature magazine is a publication of the American Scientific Affiliation, an international network of Christians in science: www.asa3.org