In his novel Till We Have Faces C. S. Lewis explores how our perception of reality is governed by our hearts more than it is by the truth. His embittered heroine, Queen Orual, has glimpsed love and beauty, only to find that it hides prevailing ugliness and disillusion. At the end of her life she gains a chance to read her long book
​of complaint to the gods, but once in their presence she scarcely recognises the text as her own. Yet she is compelled to recite it and reveal the true, morally blinded, state of her heart. 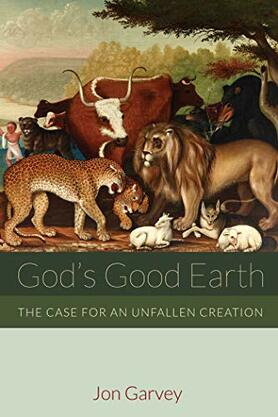 Something like that perversion of vision happened to the Christian doctrine of creation a few centuries ago, when nature became falsely implicated in the fall of mankind in the Garden of Eden. Since then, nearly everyone has viewed our world as cruel and hard. But in the first centuries of the Church, arguments for the ongoing goodness of God’s creation actually differentiated Christianity from popular paganism. It was a “Unique Selling Point” of the faith. Early Christian theologians almost uniformly wrote not only about God’s wisdom and goodness in the natural creation, but they explained how even its wild or dangerous elements remain parts of that good purpose. This included predators and wild animals, poisonous plants, animal death, inclement weather and, in fact, everything now (but not then) classified as “natural evil.”

In many cases nature’s propensity to harm people was attributed to its use by God to judge sin, but the idea that nature itself had been corrupted or changed by Adam’s fall, or that it is controlled by Satan, was virtually unknown. The Christian worldview was that nature is God’s handiwork, remaining fully under his control.

In my book God’s Good Earth, I explain in detail how that all changed at the time of the Reformation, when the so-called “traditional view” of a fallen creation first became widespread. I make the case that it stems, indirectly and almost as an unforeseen side-effect, from the hubristic Renaissance placing of man and his abilities at the centre of everything. Adam became a Prometheus-like figure who brought liberating knowledge to mankind despite God’s obstruction. The Reformation was a Christian reaction against this anthropocentrism, but in stressing humanity’s fall into depravity, the Reformers had unconsciously taken man’s centrality on board sufficiently to conclude that his failure must have taken out the rest of creation with him.

Modern science grew largely out of the Reformation worldview, and even when science became aggressively secularized in the second half of the nineteenth century, the prevailing theological pessimism about nature was carried across. In biology, of course, both Darwin and Wallace took their inspiration from Thomas Malthus in seeing life as a constant selfish competition for survival, “red in tooth and claw.” Wallace, later in life, saw nature as less competitive and far more purposeful.

Ironically, theistic evolutionists, in rejecting the Young Earth version of creation that has refined the idea of a fallen creation to the point of finding little of God’s original workmanship still remaining, often assert exactly the same degree of “natural evil.” But once the literal fall of Adam as the explanation has been rejected, evolution itself has had to become a quasi-autonomous Demiurge, clumsily doing the actual work of creation for God. This idea creates not only a problem of theodicy, but an essentially Gnostic Christianity in which the material world is the inept work of a subordinate deity.

All this is unnecessary. We should instead have rejected the pessimistic, post-Renaissance interpretation of the world and explored, as the first fifteen centuries of Christian thinkers did, how God’s creatures show forth his glory, rather than concealing or corrupting it. To the early theologians, the visible creation reveals the invisible attributes of God, at least until they are more fully manifested in Christ. And the reason it reveals God is that it was created in, through, and for Christ, who in his very being is the Logos who communicates God to his creation.

In fact, if we were to read the Bible itself carefully, we would see that there is no trace of fallen creation teaching in it (as I discuss in the first section of God’s Good Earth (2)). Many of the passages taken to imply it are, in fact, intended to contrast God’s first creation—very good, but perishable—with the even better new creation in Christ—imperishable and spiritual. Human sin is, in fact, what has been preventing and delaying that new creation from coming to fruition.

In fact, if you want to find the origin of the Bible’s teaching on the new creation, then the first place to look is in chapter 2 of Genesis, in the account of the Garden of Eden… but that’s another story, for another book.

Born in Guildford, England, Jon Garvey studied Medicine at Pembroke College, Cambridge University. Since 2011 his blog, The Hump of the Camel, has explored the theology of creation, attracting an extensive readership across the world. In January 2019 Cascade published his first book, God’s Good Earth, and his second, The Generations of Heaven and Earth, on the theological implications of the Genealogical Adam paradigm, is in preparation. He lives in southwest England, is married with three adult children and five granddaughters, is a Baptist elder, and plays guitar and saxophone semi-professionally.
God & Nature magazine is a publication of the American Scientific Affiliation, an international network of Christians in science: www.asa3.org