But who is able to build a temple for him, since the heavens, even the highest heavens cannot contain him?
​2 Chronicles 2:6

My understanding of God has changed throughout my lifetime and has been shaped by a variety of sources. Certainly, the written word of God, which informs me about the living word of God, Jesus Christ, has been the primary contributor to my perception of who God is. Although Scripture has been key in developing my understanding of God, other sources have given me insight into the nature of God as well. One of those sources has been my field of study, mathematics. In particular, my interest in mathematical modeling has opened my eyes to see God and his creation in new ways. 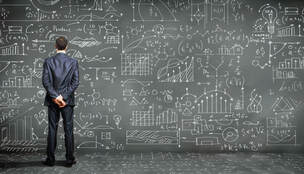 The idea of modeling God has its foundation in Scripture. The writer of Hebrews notes that the Son is the radiance of God’s glory and the exact representation of his being. Jesus told his disciples that anyone who has seen him has seen the Father. Christians look to Jesus, God in the flesh, as the perfect model of God. But glimpses of God can be found elsewhere as well. My earliest understanding of God was a direct result of my interaction with fellow Christians. In my mind, God was a soft-spoken grandfather-like man who loved me but was ready to punish me when I stepped out of line. No doubt this image was a direct result of loving parents who desired to train me in the way of the Lord, as well as what my young mind retained from sermons and Sunday-school lessons that I regularly heard in church. As such, my Christian parents, mentors, and friends served as models, albeit flawed models, of both God’s goodness and his just nature.

As I grew older and began to think critically about my faith, I looked to the natural world to gain insight into the nature of God. The immenseness of the universe pointed to God’s existence and led me to the same conclusion as the psalmist: the heavens declare the glory of God. As Paul noted in his letter to the Romans, God’s eternal power and divine nature are clearly on display, modeled by his creation. This is especially true of his image-bearers, human beings. The psalmist recognized this, stating, “I am fearfully and wonderfully made.” God’s creativity, wisdom, and love are all on display in every human being that has ever walked this earth.
​
As an applied mathematician, I have used mathematics, the language of science, to better understand the human body. I am also a runner. My understanding of running was greatly enhanced when, as a graduate student, I used mathematics to model the impact a running shoe can have on the body of a runner. This research was funded by a major shoe company to better understand injuries that regularly occur to runners, but my participation in the construction of these models not only enhanced my understanding of the human body, it also gave me a deeper appreciation of its creator. Moreover, recognizing the mathematical structure that God has built into his creation also gave me a deeper appreciation of my discipline.

Despite this recognition, my pursuit of God and mathematics remained essentially disjoint endeavors throughout my college experience, a direct result of a secular education. That changed when I began to teach at a Christian college. For the first time, I began to think about my career and my faith in a holistic manner. In particular, I began to think seriously about the relationship between mathematics and faith. My background in mathematical modeling led me to ask if mathematics could be used to gain a better understanding of God and his relationship to his creation.

God’s holiness sets him apart from his creation. His infinite nature, one aspect of that holiness, distinguishes him from humanity. No one has ever seen an infinite number of things. Even the number of atoms in the universe has an upper bound, and therefore is not infinite. Nevertheless, human beings can experience the infinite through abstract thinking that includes mathematical constructs and processes. This makes it plausible to ask if the mathematical notion of infinity can contribute to an understanding of the infinite nature of God.

A mathematical model is a construct designed to give insight into a particular real-world system or phenomenon. The model that I would like to consider is relatively simple, consisting of what is perhaps the most familiar mathematical construct of all, the set of whole numbers: {0, 1, 2, 3, 4,...}. My investigation of this model consists of a single question: what percentage of these whole numbers contains at least one “3” in its written representation? For example, the whole number 127 does not contain a “3” in its written representation, while the whole number 233 does. This model requires audience participation, so the reader should render a guess at this percentage before reading on.

This simple mathematical model allows us to interact with the concept of infinity by considering an infinite set of numbers. By interacting with this abstract representation of the infinite, we hope to catch a glimpse of the truly infinite, God.

So how did you do?  Most people guess that the percentage of whole numbers with at least one “3” in its written representation lies somewhere between 10 and 20 percent, far below the actual percentage. Does such a guess suggest anything about the nature of God? I believe it does, although it may be more appropriate to say that it suggests something about our understanding of the nature of God. In this case our calculations give us some sense of just how small the temple is that we place our infinite God into. It also gives insight into just how wrong intuition can be when it comes to understanding an infinite God.

By interacting with this model of the infinite, we gain a perspective of God that the words on the pages of Scripture cannot give. We are told that even the highest heavens cannot contain God, but our model suggests that even when we recognize the unboundedness of some entity, whether it be numbers or God, we do not fully understand all the implications of what that means. Through the abstraction of mathematics, we can go beyond words, performing calculations and manipulating the infinite, and in so doing gain a better understanding of what unboundedness really means.

Dr. Phillippy is a Professor of Mathematics at Messiah College located in Grantham, Pennsylvania. He received his Ph.D. (1991) from Lehigh University, where he was trained as an applied mathematician. Since coming to Messiah College, his research interests have shifted to include the integration of faith and mathematics and developing mathematical maturity at the undergraduate level. On a personal note, Dr. Phillippy is a runner and enjoys participating in a variety of other sports. He is married to Deb and has four children.
God & Nature magazine is a publication of the American Scientific Affiliation, an international network of Christians in science: www.asa3.org