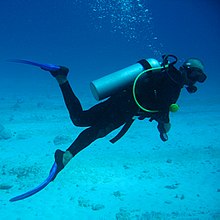 The public are reluctant to leave the safety of the shore or venture too far from it. They will not spend the effort necessary to go to the uncertain waters of the deeper ocean. They are the sunbathers and surfers—the bulk of the people at the beach. Their desire to engage with the ocean is limited.

In contrast, and to their credit, the naturalistic scientists have the courage to go to the uncertain waters of the deeper ocean and look at what lies beneath from above. They are the snorkelers. They are much fewer in number than the public. When they relate the sights they have seen, not only are the public impressed, but they are convinced that the snorkelers have seen and described all there is to see. But the snorkelers’ observations of the depths are made from the surface of the ocean. Yes, occasionally, they may take a short foray into the shallow depths, but they can’t stay there long. The naturalistic scientists’ engagement with the ocean is too shallow.

Scientists who are Christians are not afraid of the ocean, and they are definitely not afraid to investigate its depths. They are eager to do so. Furthermore, they are equipped to go deep and stay for long periods of time to explore what lies there and make remarkable discoveries. Unfortunately, they are few in number. They are the SCUBA divers. Their engagement with the ocean is deep.

The problem is that the public and the snorkelers are not willing to listen to the SCUBA divers. They are not interested in the depths. Perhaps they are afraid of the dangers they will be exposed to by going there, or they are convinced the depths are totally void and not worthy of consideration.

How can we, the SCUBA divers, convince the public and the snorkelers that they are missing much? We must become better at presenting what we see in the depths in language the public and snorkelers can understand and at finding ways of getting them interested in what we have to say.


Carlos Pinkham received a PhD in evolution from University of Illinois, Urbana Champaign in 1971. He entered the Army's environmental program at its inception and retired as Colonel in 2003. In 1982 he joined the Biology Department of Norwich University, Northfield, VT, as a Visiting Professor, where he taught environmental biology and human anatomy and physiology. In 2009 he retired as Professor Emeritus of Biology. He is the 2019 author of “The Trouble with the Trinity, A Layman-to-Layman Study of the Biblical Evidence for the Triune Nature of God.”
God & Nature magazine is a publication of the American Scientific Affiliation, an international network of Christians in science: www.asa3.org