Recently, God blessed me with an opportunity to reflect on His Divine Power. I had worked all night to finish a written report, and I was happy to finally get some physical exercise with Duncan, a one-year-old pit bull/lab retriever mix, who was even more excited than I to enjoy an unexpected midnight stroll. I was admiring the fragrant scents of blossoming trees in the air, enjoying the low humidity and perfect temperature—cool enough to keep mosquitoes at bay, but not too chilly—when I was jolted out of my reverie by a sudden yank on my arm. My forceful grip on the retractable leash catapulted me into the air for a split second, but because my body was not designed for takeoff and flight, in the next instant I plunged to the pavement and had the wind knocked out of my lungs. When I hit the ground, I felt the leash torn out of my hand, and I skidded to a stop on my right forearm and elbow. I saw a little white tail bobbing into the safety of dense vegetation with Duncan not far behind, and my first thought was that Duncan would get run over by traffic or would bolt into the woods, never to be seen again. 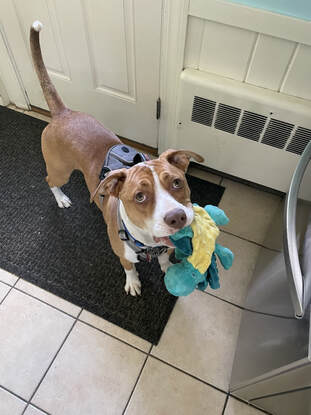 Stunned and breathless, I cried out in a feeble voice, “Duncan, Duncan…” and to my amazement, he came back to me and sat silently on the curb nearby, watching me. After peeling myself off the ground, I hobbled over to him, picked up his leash, and tried to resume walking, this time with greater awareness of the nighttime critters that might be a source of interest to my canine companion. When the stinging pain in my arm did not dissipate after several minutes, I touched my arm and realized that my skin was wet and extremely sensitive, and I noticed by moonlight that I was missing a chunk of skin the size of a dime from my lower palm. I cut our walk short and returned to home base for antibiotic ointment and gauze bandages.

Later that night, I marveled at the physics of this event. How exactly does a four-footed, 59-pound canine of medium height launch an almost-black-belt adult human almost three times his weight into the air? I’ve since learned that pit bulls are strong sprinters because of their powerful musculature. Even when not physically trained, pure-bred pit bulls can maintain running speeds of 25-30 mph over distances of one to two miles. When trained, they can build endurance for speed over greater distances. Duncan has the squared-off pectoral muscles of a pit bull, but he has a more streamlined posterior and longer leg length from his lab retriever heritage, giving him athletic power and speed. Because of his muscles and momentum, if I’m running with him, it takes longer to decelerate and to apply the brakes to come to a full stop. I have to be firmly planted and have a sure grip on the leash.

The night of the fall, I slept stiffly on my back, trying to move my raw arm as little as possible. I was aware of stinging pain from the exposed flesh on my arm coming into contact with the gauze bandage. I also could not twist or turn without discomfort. The next morning, I felt excruciating pain and intense spasms in my right side, making me wonder if I had broken one or more ribs. It took everything I had to sit up, and finally stand up, to get out of bed. I had to hold onto the walls, forcing my legs one at a time to move myself gingerly down the hallway, grimacing with pain with each step. I was humbled by how much effort it took and filled with gratitude over the ease with which I can usually move, mindful that with increasing age I may one day need assistance for these mundane activities.

Over the next week, the stinging sensation in my arm lessened in intensity as a scab formed over the raw tissue. The tissue swelling decreased, and deep bruises began to surface. My rib pain also diminished, and I was able to move around without wincing. Two weeks post-injury, the perimeter of the deepest and largest wound had dramatically shrunk in size, a few peripheral scabs had peeled off, and the regenerated tissue underneath had a shiny, red appearance, like someone had taken a curling iron to my arm. Like all the scars I carry, the new skin will have a greater proportion of fibrous tissue and will be a perpetual reminder of the night that Duncan tried to fly me like a kite.

My physical infirmities gave me reason to reflect on spiritual health and wellness and how easy it is to fall into sin. If we are not mindful every moment of every day of our lives, we can easily be swept off our feet and thrown down by dark forces unanticipated and unseen. We can be in “auto-pilot Christian mode” thinking that we are on track by going to church every Sunday, singing with the choir, serving as an usher or greeter, and be lulled by an illusion that everything is just fine. Sometimes we aren’t making conscious decisions to sin, but because we don’t pay attention to where we are going or what we are doing, we fall into sin because of our inattention. If we are not firmly grounded at all times in His Word, in prayer, and in alignment with Him, in one instant, we can be derailed from His plan for us, and be led down a path to our own destruction. The consequences of not paying attention to where He calls us to be and what He calls us to do at every moment can leave us broken, weakened, and damaged. Some of the damage might even be irreversible, leaving permanent scars.

By grace and mercy, He has provided us with skin that can heal to become even denser than the original tissue. He allows us to be restored, not just made whole, but made tougher and more resilient. He allows us to recognize that our own bodies are weak, and we only have breath and life because of Him. In the midst of weakness, by leaning on Him rather than on our own feeble selves, we can, like the apostle Paul, channel His Divine Power into our lives. He is able to turn seemingly disastrous choices into opportunities for spiritual growth.

Several days after my midnight flight attempt, I mustered the courage to try taking Duncan on a midday walk. In broad daylight, and with constant surveillance for animals that might be on the path ahead of us, I could anticipate his actions. By holding onto the leash with two hands and by firmly planting my two feet when needed, I was able to brace myself against his lurches and lunges toward suddenly startled squirrels. This canine is powerful, but I’m able to control him when I’m prepared. A week after the fall, my body had healed enough to resume light jogging with Duncan.

Likewise, our enemy is strong, but not stronger than our God. Through constant prayer and daily immersion in His Word, we can keep spiritually vigilant, firmly rooted, and intentional in our anticipation of spiritual attacks in order to avoid either choosing directly to sin or falling inadvertently into sin. If we are not fully grounded in His Word, we are easily defeated because we cannot overpower enemy attacks with our own limited abilities. We need to exercise awesome and holy divine power, not limited human power. Although this particular pit bull/lab retriever mix pulled me into a pitfall, Divine Power picks me back up, bandages my wounds, heals me, and allows me to keep on running the race for Him. Praise God!
​

​Angie Cornwell has been teaching as an Assistant Professor of Biology at Gordon College since 2014. She teaches microbiology, molecular biology, medical biotechnology, animal biology, animal physiology, and senior seminar. She serves as the faculty mentor for the student chapter of the ASA as well as for Sigma Xi-The Scientific Honor Society. She is an active member of the Danvers Church of the Nazarene in Danvers, MA, and serves on the Board as well as the worship team.
God & Nature magazine is a publication of the American Scientific Affiliation, an international network of Christians in science: www.asa3.org