Naturalists are supposed to be experts on the natural world. The best naturalists, however, are those that can interpret the physical world but also see deeper meaning in it. Some call it the “spirit of nature,” but for me, it is finding the spirit of God within nature.

I am a naturalist looking to find balance between faith and environmentalism. Many people believe that faith and science don’t mix, especially in these times when people are pulled to be on one side or the other, whatever their views. Many people think that either you’re liberal, atheist, and pro-science; or you’re religious, intolerant, and living in a closed-minded make-believe world.

Why does it have to be this way? Did one side get so extreme that the other side had to swing, like a pendulum, all the way in the other direction to counteract them? Is there no middle ground anymore? How can the two sides ever meet in the middle to work together? Why do there have to be sides in the first place? Even people who consider themselves centrists are labeled as belonging  to whatever side they may seem to lean toward. This causes an even greater rift in our already divided society. 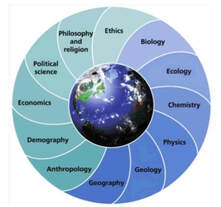 I live between the often entirely separate worlds of environmentalism and faith. A thirty-year career in natural resources was spent walking a tightrope between the two. I believe in science, but as a gift of our Maker that allows us to understand the world. I believe in evolution, as directed by a higher intelligence. Evidence for a greater power has been touted by many scientists, yet the environmentalist world pressures me to choose one or the other. So lately does the world of education. I resist.

There must be a better way than the false dilemma of creationism vs. evolution. It seems like the only two politically correct options for nature-lovers and environmentalists these days are atheism or paganism. But, in fact, for those who believe in a higher power, nature is exactly the evidence we have of God. Nature is sought out for its calming and healing effects. Those effects—serenity, brotherhood, compassion… essentially, love—are the manifestations of a Godly presence. Nature itself is not the god. We don’t worship the elements of our environment. It is the working together of the components of nature that shows us all the good forces that can also work through us. That, in essence, is God.

To discern some common sense for the faith-filled scientist, let’s look at an example. Imagine a fox in a prairie. Whether the choice for longer legs was decided by successful adaptation and reproduction over thousands of years, or whether the Creator immediately decided that longer legs would be better to walk amidst the tall grass, there is an element of intelligence involved. We know that metabolic pathways favor mobility to gather and process energy, and so came forth legs and arms, etc. This seems to give “nature” intelligence. If there’s no intelligent design, where does intelligence come from? Do we humans just randomly figure things out? No, we have the God-given ability to think. Why does nature work so well? Perhaps it also thinks. There is intelligence present, even if we don’t call it God. “Imagination,” says Albert Einstein, “is evidence of the divine.”

The purpose of God’s creation is revelation through the conduit of beauty. Creation is not a mere scenic backdrop so humans can take over the stage. Creation is a full participant in human transformation, since the outer world is absolutely needed to mirror the true inner world. The whole world is a sacrament. It is the great story of creation, redemption, and renewal—Jesus proclaimed and demonstrated the need for an external witness to establish his truth. We should follow his example. If all truth is God’s truth, the reality of affirmed science cannot be separated from the truth of the Scriptures.

In Life is a Miracle, Wendell Berry says there’s a superstition that knowledge is always good. Is all-knowing science the end goal? What happens to the mystery and miracle of life, which commands respect? With the idea of knowing everything comes the thought that I can do and make anything, therefore nothing is above me and deserving of respect. Any sense of awe is lost. The awe, the wonder of nature, is exactly what makes it so incredible and powerful. I seek to open people’s eyes to that truly awe-some character of nature, for I know that it will make people start contemplating things on a higher level. This is what I seek in studying and teaching about the environment—greater understanding, which science also claims, but on a spiritual, not material, level.

Nowhere is the scientific illusion that we can play God more dangerous than when we disrespect life and try to create or alter it ourselves. The individual becomes soul-less and is reduced in terms to a sample of tissue, to be experimented on with no regard to the consequences. If you fail to maintain a sense of wonder about our world, then you think you can know everything and therefore control it. This is where man gets ahead of himself. Pompous with his power, he loses sight of the consequences of his actions. Just like in Barry Commoner’s laws of ecology, the truth will out and the consequences will be seen. Rachel Carson documented what happened when we thought we could improve the environment to our liking with pesticides. Her book Silent Spring tells us that indeed the environment was not improved, and the losses sustained also affected human quality of life.

The great conservationist Aldo Leopold also chides us on the foolishness of believing that we are above the land. He instructed us to see ourselves as part and parcel of the land, in an all-inclusive land ethic. Seeing the importance of all parts of our world allows us to live in harmony while answering to a higher calling.

The world of science and environmentalism also lays out the balanced ecology of man in his environment. What’s often missing is the higher intelligence to answer to. Treating humans as soul-less has far-reaching psychological or even societal consequences. If all life is just matter and nothing else, to be manipulated and experimented on, what is the point of the individual, of creativity and cultural accomplishment? Science reduces the matter studied to black and white. If a gray area—that which we have no explanation for—exists, it is assumed that we just don’t have the knowledge yet, and that we eventually will. But we suffer from what the ancient Greeks called acatalepsy—we are human and not all-knowing. Only God is, and we aspire to share His complete knowledge when we are finally with Him.

The great Christian spiritual writers have given us many arguments for the God-ecology connection. St. Hildegard of Bingen calls the divine spirit in nature viriditas. It is the life force, such as the readiness in plants to receive the sun and to transform it into energy and life. Thomas Merton used the Greek term theoria physica for the recognition that God is manifested in nature and to worship nature without Him is unfulfilling. From Meister Eckhart we learn that, along with the Scriptures, creation is a book of God that reveals the divine with a proper reading. Through creation we touch God’s Word. Those who are familiar with creation experience the fullness of God. Naturalist and Transcendentalist Ralph Waldo Emerson believed that God was revealed through nature, and that nature required reverence and awe to behold it. Finally, Teilhard de Chardin’s philosophy was that religion and science need not be competitors. He held that creation is something that continues today, something living that we contribute to; i.e., the ‘living God.’ The ultimate goal of evolution, in his view, is our souls joining with God.

Yes, God wants us to know all about creation. He invites us in and says, “Look, I made this for you so you can better understand me.” He doesn’t say, “figure this out and you can control the world.” Those who worship  science alone must be searching for something to fill that spiritual hole within. For we do have a soul, and to act without it is to be unhuman. Following the logic for the science worshipper would affirm that we do not matter, that our actions do not matter. So why press on at all? This faith-based naturalist demurs, believing that we are here to make things better and work toward God’s kingdom on earth.


Clara Klein has been a freelance writer for over three decades and a naturalist all her life. With degrees in agriculture and natural resources, she has 30-plus years’ experience in these fields. Certified in environmental education and interpretation, she is also practiced in nature writing, storytelling, and ecotherapy. Now retired from her career but still writing, Klein hopes to use her experience to lead others to insights about faith and the natural world.
God & Nature magazine is a publication of the American Scientific Affiliation, an international network of Christians in science: www.asa3.org