Relationships: many are complicated, some are simple. Perhaps the most discussed relationship in the history of mankind has been the one between God and His creation. As a person who believes in the God of the Bible and who enjoys studying His marvelous creation, it is one of my foremost passions to study the relationship between the two and unveil the beautiful truths therein. Knowing these essential truths allows people, God’s most beloved creation, to strengthen and deepen our own relationship with our unconditionally loving Creator. This enriched relationship deepens our love for God and our trust in Him, releasing greater blessings in our lives that form us into the person God purposed us to be.

Therefore, it is invaluable for all people to study the relationship between God and His creation. Some believe the many intricate facets of this relationship can best be understood through the Bible, the written Word of God. For example, many young-earth creationists believe that the Bible overrules scientific evidence if need be (Rau, 2012, p. 51). Others believe that science, as the study of God's creation, can be fully integrated with the Bible to shed light on the relationship. Old-earth creationists, for instance, hold that “God chooses to reveal himself through the Bible and creation, both of which clearly disclose his existence and identity” (Rau, 2012, p. 49). 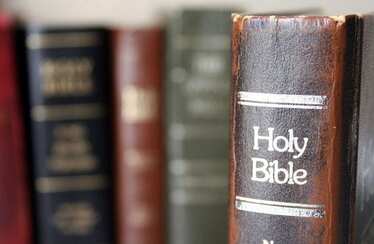 I believe the Bible is the one and only true, divinely inspired, infallible, authoritative, inerrant, living, written Word of God. According to the 1978 Chicago Statement on Biblical Inerrancy, “God, who is Himself Truth and speaks truth only, has inspired Holy Scripture in order thereby to reveal Himself to lost mankind through Jesus Christ as Creator and Lord, Redeemer and Judge. Holy Scripture is God’s witness to Himself.” The Bible tells us in 2 Timothy 3:16-17, “All Scripture is given by inspiration of God, and is profitable for doctrine, for reproof, for correction, for instruction in righteousness, that the man of God may be complete, thoroughly equipped for every good work.”

​Since the Bible is the Book of Scripture (special revelation) and science is the study of the Book of Nature (general revelation), it follows that the Bible and science can be integrated to show that a relationship between God and His creation indeed does exist. In other words, since God is the author of these two divine, true Books—both Books come from God's mind—no real conflict can exist between the two. "If Scripture has anything to say about the natural world, then what is revealed in Scripture should not contradict what is revealed by studying the natural world itself" (Haarsma and Haarsma, 2011, p. 73). God wrote each Book to complement the other so that when we read both and seek to understand them, we can obtain the most accurate knowledge and understanding about God and all of creation.


According to the creation account found in Genesis, God created the heavens and the earth in six “days” and rested on the seventh “day.” Genesis 2:1-2 reads, “Thus the heavens and the earth, and all the host of them, were finished. And on the seventh day God ended His work which He had done, and He rested on the seventh day from all His work which He had done.” What does science reveal about earth’s age?  The foremost scientific method for measuring the age of our planet is radiometric dating. This reliable precision technique dates earth’s oldest known rocks, found in the Slave Craton in northwest Canada, to be close to 4 billion years old, zircon grains found in the Jack Hills of Western Australia to be approximately 4.4 billion years old, and the majority of almost a hundred meteorites to be between 4.4 and 4.6 billion years old (Cox & Forshaw, 2017, pp. 32-33). Thus, current comprehensive readings of the Book of Nature reveal earth to be approximately 4.55 billion years old, give or take 50 million years (Cox & Forshaw, 2017, p. 10).

At first glance, a literal interpretation of the Book of Scripture and a scientific reading of the Book of Nature on earth's age seem to be in conflict with one another. However, this seeming conflict cannot be further from the truth. We must receive revelation knowledge from God about His two Books in order to more fully and accurately understand them. We must interpret biblical passages in light of their historical and cultural context and unveil hidden details and mysteries found in both Scripture and Nature.

There are numerous revelations from the Book of Scripture and the Book of Nature that demonstrate how both the Bible and science point to an old earth. For instance, one of the meanings of the word yom, the word for “day” in Hebrew, is a long, finite period of time, revealing that the creation “days” in Genesis are not necessarily earth-days of 24 hours. There are also several passages in the Bible that directly describe the earth as old. In Deuteronomy 33:15, Moses speaks a blessing over Joseph, saying that he will be blessed “with the ancient mountains, with the precious things of the everlasting hills.” Habakkuk 3:6 says, “He [God] stood, and shook the earth; he looked, and made the nations tremble. The ancient mountains crumbled and the age-old hills collapsed. His ways are eternal.” Proverbs 8:22-23 reads, “The Lord possessed me at the beginning of His way, before His works of old. I have been established from everlasting, from the beginning, before there was ever an earth.”

All Scripture is quoted from the NKJV unless otherwise noted.


Marina George has earned a Bachelor of Science in Biological Science and a minor in Biblical and Theological Studies from Biola University (La Mirada, CA) and a Master of Science in Cosmogony (Origins Science) from Regent University (Virginia Beach, VA). She has a God-given passion for teaching people how science and the Bible integrate to bring glory to God and to draw people intimately closer to their divine, holy, and loving Creator. She gives special thanks and appreciation to Matthew Pevarnik, Ph.D., Assistant Professor of Physics at Regent University, as well as to her parents, Joseph and Gina George, and brother, Michael George, for making her work possible through their prayers, contributions, and support.  ​
​
God & Nature magazine is a publication of the American Scientific Affiliation, an international network of Christians in science: www.asa3.org