Regular readers will remember that I have an interest in history, particularly finding out more about people who wouldn’t be described as famous, but with whom I have some connection or feel some affinity. Recently I’ve been reading about Henry Hurd Swinnerton, C.B.E., D.Sc., F.Z.S., F.G.S., A.R.C.S., who lectured at the University of Nottingham and was also a prominent and influential figure in the history of Sherwood Methodist Church, which I attend. Henry was Sunday School Superintendent from 1908-1952. He was also a trustee and a local preacher. 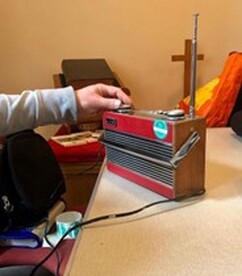 ​Henry was a “cradle Methodist”. His father, George, was a Wesleyan Methodist Minister who served in many regions of England and Wales and also overseas in British Guiana, where he married Mary Jane Smith. George Swinnerton’s obituary records that “[he] was an adept in the beautiful art of doing kindnesses, and possessed in large measure the gracious gift of comforting those in sorrow.”

Henry was born in Suffolk in 1875 and spent his early life in out-of-the-way country places,
mainly in the Yorkshire Dales. After an education spent in Leeds, Bath, and at London University, he arrived in Nottingham in 1900, and, after a period as Head of Natural Sciences, he was appointed as the University of Nottingham’s (then Nottingham University College’s) first Chair of Geology and Geography in 1912, a position which he held until his retirement in 1946. After he retired, he became curator of the University’s museum and was often seen sitting on the steps polishing fossils. Apparently, his favourite quip was, “Look, they’ve put me in a museum!”

Henry’s passion for geology is likely to have raised some interesting questions for him regarding his Christian faith. He lived at a time when perhaps most church-goers in Nottingham would have believed in a literal interpretation of the accounts in Genesis of Creation and the Flood. In 1904 there was a talk on “The Creation and Science” given to “The Sherwood Men’s Meeting” at Sherwood Methodist Church. It is possible that Henry Swinnerton delivered the talk. Years later, in 1938, Henry published an academic paper on “Development and Evolution” in the prestigious academic journal, Nature, which was in line with mainstream academic opinion.

As well as academic papers, Henry Swinnerton wrote many books, including Solving Earth’s Mysteries: Geology for Boys and Girls, which has a drawing of a dinosaur on the front cover. Swinnerton often quotes work by Charles Lyell—a contemporary and friend of Charles Darwin, who managed to hold his Christian faith in tension with an acceptance of much of Darwin’s theory of evolution. Swinnerton’s books are not easy to read. A recent review notes that “he hasn't quite the gift of current popular science writers”, which is perhaps a little harsh, given that he was writing at a time before “popular science” was an acknowledged genre.

In his books, Swinnerton combines Scripture with Science as the following extract illustrates:

The earliest answers to the question [“where did everything come from?”] were inscribed by men who lived three thousand years ago            or more in Mesopotamia. These tell, in story form, how everything we see in Nature around us was the handiwork of an amazing                  variety of gods, devils and demons… These stories were long since forgotten… About five centuries before Christ a quite different                    explanation was given by the Hebrews in the form of a charming poetic story starting with the words, “In the beginning God created            the heavens and the earth.” This story was kept fresh in the memory and passed on from one generation to another; and then, a                      century and a half ago, people began to feel that they would like to know more details about the ways in which rocks and living                      things were made.”

He writes about the difficulties of combining scientific discoveries with “old views of Nature”: “To the few who collected fossils, and studied the rocks in the quarries and cliffs, other facts became known which could not be so easily dovetailed into old beliefs.” But rather than replace religious belief with science, Swinnerton managed to weave the two together and noted that as the earth went through geological change over millennia, “…Meanwhile man progressed from being more than a beast of the field to being only a little lower than the angels.”

Swinnerton’s writing also has an ecological theme. His concluding words in a chapter called “Yesterday and to-day” are as follows:

Nature waits patiently for a cessation of man’s activities, when she will return and convert his ugly tip-heaps and gravel-pits into                things of beauty. Taken as a whole, however, they are but tiny blots upon a landscape whose harmonious beauty has been enriched by            contributions from all the ages: the sunshine and the air from the condensing nebula; gneiss, schist, slate, conglomerate, limestone                from bygone mountains and seas; algae, mosses, ferns, monkey-puzzles, palms and oaks—relics from ages when each type in its turn            was supreme; dragon-flies, snails, lizards, kangaroos, butterflies, pigs, cattle, apes, each in their own way adding some points of                    interest, some unique splashes of beauty to this complex world.

Man is indeed the heir of the ages. The more he realizes this the more anxious will he become to refrain from wanton destruction,                  and to make his own contribution worthy of these survivals from the past.
​
What of Henry Swinnerton’s legacy? I’m told that a room in the old Methodist Church was named after him, but that is long gone after the church was demolished and rebuilt over forty years ago. In 1906, Henry Swinnerton married Florence Daisy Bennett. They had three daughters. One of their daughters, Betty, went as a missionary to India. Looking further down the Swinnerton family tree, one of his grandsons, Jeremy Swinnerton Taylor (who died in 2017) was active in Yeovil Methodist Church, and together with his wife, Hazel, ran numerous clubs and activity groups for children. Henry Swinnerton’s Methodist heritage appears to have been faithfully passed down the generations.


​​​​Mike Clifford is an Associate Professor in the Faculty of Engineering at the University of Nottingham. His research interests are in combustion, biomass briquetting, cookstove design, and other appropriate technologies. He has published over 80 refereed conference and journal publications and has contributed chapters to books on composites processing and on appropriate and sustainable technologies.
God & Nature magazine is a publication of the American Scientific Affiliation, an international network of Christians in science: www.asa3.org