At the close of an intense, mentally-stimulating conference, I feel like my brain is filled to capacity, overloaded. As scientists, scholars, researchers, academics, and intellectuals we have exceptionally active brains. We discover, uncover, and rediscover. We analyze, synthesize, and criticize. We reduce, induce and deduce. We investigate, replicate, duplicate, explicate, extricate, sometimes obfuscate—because our brains are full.

Now of course, as scientists we know that is not physiologically possible—apparently there are no limits to neural capacity. But it sure feels that way. And it may be more accurate to say we use the cognitive, analytical parts of our brains more than the artistic, creative and contemplative parts (although we now know that the brain does not easily divide into compartments). To be even more accurate, since we now know there are neural receptors in other parts of the body, including the heart and gut, perhaps we should talk about analytical neural networks…However, I’m now doing the very thing I’m expressing concern about… 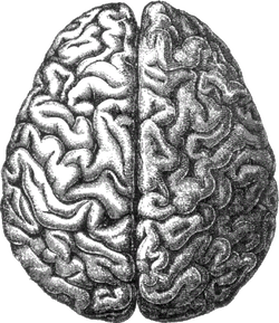 The problem of over-driven brains spills over into our non-academic lives, too. We often pride ourselves on multi-tasking—just to ensure our brains don’t have a split second of nothingness. When we take breaks (apparently a scientifically proven beneficial thing-to-do), we text and tweet, we watch T.V., and fill our minds with endless images, sights and sounds, and senseless noise.

Even when we don’t intend it, the world around fills our brains continuously.

Not only are our lives filled with technology, but society has increasingly moved indoors—we’ve lost the therapeutic benefits of nature. We’ve grown increasingly alienated from creation. We’ve also grown disconnected from our bodies and lost touch with bodily experience of the world.

Having a full brain is problematic—not least because it leaves little room for the divine presence.

When our brains are busy:

We forget to taste and see that the Lord is good.

We forget that even the son of God needed time alone; quiet places to commune with his father in heaven.

We forget that the Holy Spirit often speaks with a whisper.

We forget that Jesus invited the weary to come to him for rest, and that he would carry our burdens.

We forget that Jesus welcomed little children and said that the kingdom belongs to such.

These are challenges for everyone, but perhaps more so for those of us with hyperactive neural networks. Personally, my intellect was a hindrance to my Christian faith journey. I had all the answers. I was easily able to rationalize that since I was basically a ‘good’ person, I was all right. Through a three-year journey, the Lord patiently took me to a point where I was able to surrender to him in a step of faith. Of course since then I’ve worked on integrating my intellect with my faith. But it’s an ongoing process. My overactive brain continues to be an obstacle to communion with God. Even when I research theological matters, I fail to consider and reflect on the ultimate source of what I am studying. The person, the truth, the reality who inspired the words I am studying. Where is the off switch?

It is somewhat paradoxical that we use our God-given brains to investigate God’s good creation, which includes our brains. Fulfilling the Genesis cultural mandate is not a bad thing. Some of us focus on the cosmos, others on the psyche, most on the spectrum in between. It is a delight to explore and understand God’s creation. But we are always in danger of the temptation to prioritize the creation over the one who made it all. We need to recognize the limits and the dangers of our overactive neural networks. In our fast-paced and high-tech society, in our publish-or-perish academic worlds, we seem to have lost, first, the capacity to be mindful and, second, the sense of imagination.

To help remedy the first, I suggest we switch from having full minds, to being mindful, living in the moment and practicing the presence of Christ. I feel hypocritical talking about mindfulness, because I fail so miserably at it. I even skim read a book on mindfulness! In the psychology literature, mindfulness is described as an orientation to the present moment that is characterized by curiosity, openness, and acceptance. When we're mindful, we observe our thoughts and feelings from a distance, without judging them as good or bad. Instead of letting life pass us by, mindfulness means living in the moment and awakening to experience.

I find this easier to accomplish when I am outside in nature. It is interesting that most critical biblical events occurred outdoors; e.g., Jesus’ baptism, temptation, transfiguration, and entry into Jerusalem. Jesus walked on the earth in the heat of the day, on grass that withers, and rocky soil; he walked past barren trees, and pretty flowers; Jesus was deeply connected to the earth. Connection with creation may improve our connection with the Creator.

Although a somewhat new concept in psychology, mindfulness has been much written about in the Christian contemplative tradition. Brother Lawrence (1692) wrote about practicing the presence of God. He encourages us to talk to God continuously, and when we stray, to stop and direct our minds towards God, to return without recrimination. We are to think of God when doing little things, in all times, all places, before sleep, and on awakening. We are to act in faith that God never fails to offer grace. Prayer and work become interchangeable because the practice is continuous. When we talk to God continuously, there is only God. Practicing the presence of the Lord is in fact better than mindfulness because the object is to have faith in God. Brother Lawrence prayed while washing pots in the monastery kitchen, perhaps we can be mindful of God’s presence when washing test-tubes in the lab.

The practice of spiritual discernment is similar to that of mindfulness. In contemporary theology it is described as watching, noticing and observing; not thinking as in analysis and examination. When our minds are still, we can hear the divine whisper.

A second solution to the problem of brain overload is to cultivate our imagination. Albert Einstein famously claimed, “imagination is more important than knowledge.” Imagination, story and figurative language are an essential part of the biblical witness: God speaks through a burning bush and a whirlwind; Jesus teaches through parables; the psalmist tells us to open the eyes of our minds and Paul talks about the eyes of our hearts; Jeremiah experiences a burning fire within, as do the disciples on the road to Emmaus.

Imagination involves play and becoming like children. Little ones are naturally imaginative, in touch with their bodies and nature. Thérèse of Lisieux (1894) taught the “little way,” drawing from Jesus’ invitation to let the little children come to me. The smaller we are, the easier it is for God to lift us up. When we are light, we are not weighed down by anxiety, fear, heaviness or the solution to the cosmological constant problem.

Knowing God takes us beyond our five senses. The Lord does not speak with the language of logic. We cannot know God through scientific analysis, or biblical exegesis. God is not amenable to mathematical formula; he does not fit into an equation; his ways do not add up; his actions cannot be reduced to their component parts, he is indeed a complex system—wild, unpredictable, dangerous.

Many theologians have started noticing the importance of imagination, pointing out that divine revelation is addressed mostly to imaginative, not analytical, faculties. It is conveyed with the obscure language of symbol, myth and metaphor, not with precise, literal language. Deep truths about divine reality are expressed in figurative form and require our creative imaginations. The Christian life needs to consider not just intellect and brain, but also embodiment and story, kinesthetic and poetics. The logical mind often misses the symbolic voice heard by the intuitive senses.

In case you’re worried that I’m trying to convince you to give up your careers in science and convert you all into artists or hermits, I can reassure you that God can give scientific insights in non-analytical, imaginative forms. We all know of Newton’s insights about gravity when watching an apple fall; Kekulé dreamed of a serpent eating its tail, which helped him develop the molecular structure of the benzene ring; and Archimedes ran naked through town after his bathtub revelation about the relationship between liquids and solids (sorry about the image).

So by turning off the analytical part of our brains, we may have fruitful insights, and remarkable inspiration. More importantly, we will be better able to know God. If we submit to him, the Holy Spirit can reconfigure our neural networks. We are created as whole beings and need to remember that all things, our minds, brains, hearts, souls and bodies, our cingulate gyri, mitral valves, zygomatic arches, Golgi apparatus, Eustachian tubes, left femoral arteries, baby toes—all things cohere in Christ.

If we persist in cultivating overactive, noisy brains, we may not hear the still, small voice of God.

If we fail to become like children, we may not be able to enter the kingdom.

If we neglect the creative parts of ourselves, we may fail to discern the Lord who speaks through imagery and story.

If we remain disconnected from our bodies, we may not feel the divine embrace.

E. Janet Warren (MD, PhD) is past president of the CSCA. She is an independent scholar in Christian theology and a Family Physician with a special interest in mental health care and psychotherapy. Her research interests include the integration of psychology and theology.