The hearing ear, and the seeing eye, the LORD hath made even both of them. Proverbs 20:12 – KJV

How came the Bodies of Animals to be contrived with so much Art, and for what ends were their several Parts? Was the Eye contrived without Skill in Opticks, and the Ear without Knowledge of Sounds? ... And these things being rightly dispatch’d, does it not appear from Phænomena that there is a Being incorporeal, living, intelligent...? Isaac Newton, Opticks

When I was a teenager, I remember hearing the question “If a tree falls in the forest and no one is there to hear it, does it make a sound?” and thinking, what a stupid question—of course it makes a sound. But the longer I teach science, and the more I learn about our world at the quantum level, the less sure I am about the true nature of reality. 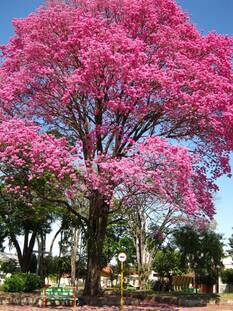 Of course, when a tree falls in the forest, it sets up a series of pressure waves in the earth’s atmosphere that, when interacting with the tympanic membranes in our ear canals, initiates a series of events that ultimately generate electrical signals that travel along the auditory nerve to the brain, which “plays” a sound for us. But if no one is there to interact with those pressure waves, then no—the tree doesn’t make a sound because a sound is the result of an interaction, or, perhaps better stated, a measurement.

As I write, I am looking out my office window at a Tabebuia tree, its pink and yellow trumpet-like flowers in full bloom. But what is pink and what is yellow? The colors are caused by photons of light emanating from organic molecules in the flower petals, which, upon absorbing sunlight, reemit that energy as predominately pink and yellow light. The flowers are colorless in the dark. The emitted photons are vibrating in the red and yellow portion of the visible electromagnetic spectrum. These wavelengths interact with my retinas to trigger a complex series of chemical reactions that ultimately produce an electrical signal along my optic nerve causing a movie to play in my brain of pink and yellow flowers gently blowing in the breeze.

I touch something, and even with my eyes closed, I can sense whether it is sharp or smooth, hot or cold, wet or dry, round or square. Receptors in my skin send messages to my brain activating a mental rolodex of stored images. The same case can be made for our sense of smell: aromatic molecules alight on olfactory receptor neurons in the nose, allowing us to distinguish thousands of different odorants.

What happens next after any sensory interaction with our surroundings is truly magical—a response, perhaps a memory, is triggered, pleasant or otherwise, or our fight-or-flight instinct is switched on as we see and hear something that places us in imminent danger. Or it could be something more banal: the aroma of roast chicken alerts me that my wife is cooking dinner— or a different sort of pungent odor, that the dog has had an accident on the carpet again.

Apart from human interaction, in its harshest, most unfeeling characterization, reality is just a confluence of electromagnetic fields and invisible particles—mostly empty space. It is therefore not so farfetched to conclude that the universe with all its unfathomable intricacies can only be understood through human interaction, and therefore was made for us to be appreciated as a God-given gift.

It is by science-faith that I state my case. And I’m in good company with the writer of the book of Hebrews, who explained that the unseen things of this world could only be understood by faith, which he characterized not as intangible but substantive and evidentiary: “the substance of things hoped for, the evidence of things not seen” (Hebrews 11:1 KJV).

The Apostle Paul also understood this, writing in Romans that the “invisible things of him from the creation of the world are clearly seen, being understood by the things that are made, even his eternal power and Godhead; so that they are without excuse” (Romans 1:20 KJV). Paul—the great theologian—waxing eloquent not just of the spiritual world but of quantum phenomena. And perhaps this is why the quantum world remains a mystery: it is there that the material intersects with the spiritual and can only be fully understood by both mind and heart; intellect and faith.

We humans of course are “the things that are made.” God has given us the ability to clearly see and understand the invisible things; even His “eternal power and Godhead.”

Clearly, we are without excuse.

Gregory J. Rummo, B.S., M.S., M.B.A. is a Lecturer of Chemistry at Palm Beach Atlantic University in West Palm Beach, Florida. Prior to moving to Florida in 2017, he was the CEO of New Chemic (US) Inc., a pharmaceutical company that markets active pharmaceutical ingredients to the animal health industry. He also authored numerous columns and feature articles for several New Jersey newspapers. Many of these published columns have been reprinted in a series of books entitled "The View from the Grass Roots."    ​
God & Nature magazine is a publication of the American Scientific Affiliation, an international network of Christians in science: www.asa3.org