Sitting on a beach and enjoying the sights and sounds of the surf, I noticed a crowd of small birds at the edge of the incoming tide. They were sandpipers, running very fast back and forth on the sand, occasionally stopping to poke at the ground with their long beaks. I saw one scurry with something hanging from its beak, probably a worm.

One could ask why these birds behave this way, and the answer is obvious to anyone with some understanding of biology. The birds, like many other creatures, are always or at least most of the time searching for food. Why they are searching for food is a more difficult question. The first answer we are likely to come up with is that they, like we humans and all animals, need food in order to survive. Food is the source of energy and raw materials needed to sustain the cells and their components that make up the body of the bird. But that raises the next question: how does a bird (or for that matter, a worm, insect, or bacterium) know that? They don’t, of course, so while the ultimate purpose for finding and eating food is to survive, that is not why animals hunt or graze or do whatever they need to eat. Like all animals, these birds are looking for food because they are hungry, which is an entirely different thing than knowing that one needs food in order to survive. 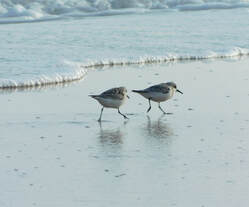 We can be sure that there is no inner voice urging them to find food and eat it based on any kind of knowledge that doing so will keep them alive. What drives them instead to run and poke in the sand is the urge to relieve the discomfort of hunger. And that discomfort is a product of evolution.

Like all pain, hunger has an essential purpose, one that would not be met if it didn’t exist. The purpose of hunger is to get the animal to seek out and eat food. The mechanism of hunger involves many very complex biochemical processes, including feedback sensory systems that detect low sugar, convey signals to the brain that are felt as pain or discomfort, and hormonal and neural impulses that lead to searching for food. The evolutionary history of this behavior is ancient and can be traced to the most primitive of animals. Single cells and organisms without brains or sensory systems have developed complex chemical signaling and response patterns to detect and absorb food molecules.

Evolution includes the concept of purpose embedded in its very definition. When we speak of natural selection, we are invoking the idea that the selected phenotypes (assumed to arise from certain genotypes or collections of specific alleles) are those that fulfill the basic biological purpose of survival better than others.

Evolutionary processes had to provide a surrogate mechanism to motivate creatures to eat. If there were no feeling of hunger in a particular sandpiper, it’s quite likely he would be sitting on the beach, much like me, watching his friends and relatives scampering about poking in the sand and eating disgusting looking things with a sense of amusement and wonder. “Why are they doing that?” he would think while enjoying the sunshine and resting silently. And after a day or so, without feeling much of anything, he would simply die.
​
Biological evolution solved many problems of getting creatures to do things they need to do in order to survive starvation, predators, toxins, etc. by producing surrogates for the real purpose that such behaviors are meant to follow, thus enhancing the probability of survival. The pain of hunger, the feeling of terror at the sight of a predator, and the avoidance of things that taste bad are all examples of such surrogate purposes. Sexual and other desires and instincts enforce the need for species to reproduce. All of these feelings and motivations were used by evolution to achieve the basic purpose of all living creatures: to survive and reproduce.
​
Removing the concept of purpose from biological theory was a great mistake. Surrogate purposes are still purposes, and to deny that hunger has a purpose is absurd. An argument could be made that biological purposes are teleonomic (determined by a program) rather than teleological (determined by an agency), but that debate is theological or philosophical. Evolution is a process that is fundamentally purposeful, and to ignore that fact is to hinder a deeper understanding of biological and biochemical mechanisms.


​
God & Nature magazine is a publication of the American Scientific Affiliation, an international network of Christians in science: www.asa3.org