By Ranjit. A. Thuraisingham

When we ponder our existence, a question we often ask is Are we related to something outside of ourselves? Biblical revelation tells us that we are related to something infinite. In the first book of the Bible, Genesis, it is written: “God created man in his own image, in the image of God he created him; male and female he created them” [Genesis 1:27, ESV]. St. Paul, writing to the Christians in the Corinth church, says: “Do you not know that your body is a temple of the Holy Spirit who is in you, whom you have received from God?” [1 Cor 6:19, BSB]. The mystical experience of being small and insignificant and yet also being part of something hidden and infinite is explored in this essay by reflecting on the idea of a hologram as well as through quantum physicist David Bohm’s theory of “Implicate Order”.

In a photograph obtained using a lens, there is a point-to-point correspondence between the object and the image. Each point in the object corresponds to a point in the image. Such a correspondence is absent in holographic photography [1, 2]. One way of obtaining a hologram involves the use of a laser and a beam splitter, an optical device that splits the laser light into two beams. One of the beams is directed onto the object. The light reflected from the object is then directed onto a high-resolution photographic plate. The other beam, referred to as the reference beam, is beamed directly onto the photographic plate. Both these beams collide at the photographic plate producing an interference pattern, which  is recorded. 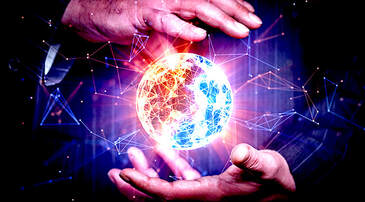 The complex swirls of interference patterns recorded in the photographic plate appear meaningless and disordered to the naked eye, but there is a hidden order which the naked eye is unable to perceive. When illuminated with laser light, the pattern produces a three-dimensional image of the original object that can be viewed from any angle. The same image (though much less clear) is seen also from a cut piece of the hologram, indicative of a hidden connectedness of each element to the original image. Illumination of the hologram by the laser light unfolds the hidden structure present in the interference pattern. If our perception were limited to the complex swirls of the hologram, we would miss the hidden image of the object present in the photographic plate.

Bohm, in his study of subatomic particles, observed that connectivity exists between subatomic particles even when they are separated by distances which require superluminal signalling speeds. This led him to propose an ontological framework called the Implicate Order [3, 4] to view reality at the quantum particle level. This theory, based on his published work on the causal interpretation of quantum theory [5, 6], opened the door for the creative operation of an underlying and yet subtler level of reality. To elaborate on this, he noted that subatomic particles are not simple structureless particles defined by probability, but instead follow a precise path which is determined not only by conventional physical forces but also by a more subtle force which he calls the quantum potential.

A term within the Schrödinger equation guides the movement of quantum particles. The conventional Schrödinger equation contains two terms; one deals with the kinetic energy of a wave function and the other with its potential energy. But in Bohm’s hidden-variable theory there is another term referred to as the quantum potential. When a negatively charged electron encounters an electrical field, it experiences a force that depends on the strength of the electric potential. The effect of the quantum potential is different. Its effect on the electron depends on the information it provides about the environment surrounding the electron. Bohm gives the analogy of a ship being guided by radar signals: the radar carries information from all around and guides the ship by giving form to the movement produced by the engines.

The quantum potential has a number of interesting nonclassical features. The effect of the quantum potential does not diminish as the distance between the particles increases; it acts instantaneously, which means that particles separated by even space-like distances can be correlated; and it depends on the quantum state of the system as a whole—that is, the interaction between two particles depends on more than the two particles, where in the limit, it may even depend on the quantum state of the universe as a whole. Bohm postulated that the quantum potential pervades all space and provides direct connections between quantum systems. The quantum mechanical phenomenon known as the Aharonov-Bohm (AB) [7] effect is an example of this quantum interconnectedness where in certain circumstances electrons are affected by an electromagnetic potential despite being confined to a region where both the magnetic and electric fields are zero.

The enfolded image of the object in the hologram and the presence of the mysterious hidden quantum potential amongst quantum particles are both reflective of a deeper dimension of reality present in the universe. So why do many miss experiencing this spiritual awareness of a hidden presence? When our total focus is on the visible, we miss the hidden. The principle of complementarity [8] in quantum mechanics states that the result of an observation is dependent on the focus of the observer. A related factor is having a dualistic mind. A dualistic mind thinks in a binary manner with only two options: either-or. It sees a divided reality of body and spirit. A non-dualistic mind [9], on the other hand, sees a united, non-fragmented world. It includes a component of mystery and does not separate body and spirit, viewing them as united.

This is what Incarnation proclaims. Such a mind has the best chance of experiencing awareness of the hidden. It will not reject the enfolded spirit present in the body and will receive with humility when the undeserved gift from the One, who is totally hidden and yet perfectly real, reveals it to him.

Ranjit. A. Thuraisingham is a theoretical chemist who holds a PhD in molecular quantum mechanics from the University of Cambridge, UK. His scientific publications are in areas related to molecular physics, acoustic scattering, molecular neuroscience, and biomedical signal analysis. He is now retired but is associated with the Rehabilitation Studies Unit, University of Sydney, as an honorary research fellow. He is a Christian and is engaged in trying to complement his understanding of Christianity with quantum physics.
God & Nature magazine is a publication of the American Scientific Affiliation, an international network of Christians in science: www.asa3.org