Catholic thinkers, including a number of recent pontiffs, have expressed the opinion that the Theory of Evolution and Catholicism are not incompatible. This compatibility must be explained to Catholics and other Christians if we want their understanding of the principles of our religion to become operative and serve them in their dealings with the intellectual challenges that will surely arise during their life.

One of the major reasons for Catholics abandoning their religious practices and losing the beliefs they had acquired while attending religion classes to prepare for their first post-baptismal sacraments is the fact that after they pass those thresholds, their religious education stops, and the faith they acquired as children is no longer sufficient once they reach maturity. The intellectual enrichment of a high school and college education, in the absence of an equal intellectual enrichment of their religious faith, brings predictable results. Within a few years these youngsters grow physically and mentally into mature adults, enter the world of work and professions, and undertake marriage and family life. However, their religious education has stopped at the level of early teenagers who went, often unwillingly, to religion classes to prepare for confirmation. Religious principles formulated in a way twelve or thirteen-year-old minds can grasp will surely not meet the needs of mature adults for a reasoned understanding of the fundamental principles of their religion. 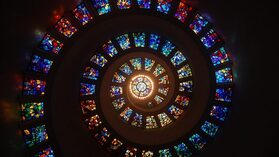 Young adults in high school science classes, especially in public school in the United States, are studying the nature of the universe and confronting the theory of evolution, a set of concepts foreign to the creationism basic to the beliefs they learn from the scriptural studies presented in catechism classes. No wonder that by the end of high school their faith is in crisis, that a college education is most likely going to deliver a mortal blow to it, and that their religious practices are often abandoned during this period, especially if for the first time in their life they are away from home.

We can never expect to have a complete rational and scientific understanding of all the truths of our religion. If they were entirely accessible to human rationality, they could not be of divine origin or the object of divine revelation. We could never understand, for example, certain attributes of the Divinity: its eternity, its Trinitarian nature, its ability to create through the power of its mind and will. These "mysteries" are not opposed to human reason, as absurdities are, but superior to it. So it is with many of God's other attributes.

It is necessary to gradually prepare oneself to be able to understand, and explain to others, the reasonableness of one's religion. The principles that we draw from the truths of revelation must satisfy our rationality; they cannot contradict the truths that we learn, for instance, through scientific study, when these are definitive truths. In some cases, it is the state of human knowledge and the language used at the time of revelation that creates an apparent contradiction, a disagreement with the knowledge of reality that we possess today. It is up to us to compensate for that gap and make the proper adjustments.

We now know with sufficient probability that humans derived from an ancestral animal through the evolutionary process common to all living things. As the process unfolded, with the progressive expansion of the brain, increasing intellectual awareness developed, and with it, the increasing capacity to distinguish between good and evil, our moral awareness, was born. As long as the instinctual drives of animal nature were prevalent, during the earlier evolutionary stages, there was no possibility of distinguishing between good and evil; there was in fact no good or evil, and thus no sin. As the intellect emerged sufficiently to make the awareness of good and evil possible, moral awareness was born, and with it the capacity and necessity to choose; that is, free will. With greater intellectual and moral awareness came greater ability to overcome the dominance of animal instincts.

Once human beings had achieved that intellectual and moral awareness, the innocence of the animal world was lost to them. They had eaten the fruit "of the tree of knowledge of good and evil" (Gen. 2:9, 17). They had left the earthly paradise forever and the struggle between their evolving moral awareness and their instinctual drives had begun, for instinctual drives did not disappear. Human nature is dual: it encompasses both animal-physical and intellectual and spiritual forces.

Phases of Revelation. Only a few Truths were to be revealed by Christ, but they are Fundamental to Christianity.

The phase of revelation that consisted in the manifestation of the Divinity in the person of Christ was not intended to explain to humankind all the truths about our created universe, only those basic truths that would help guide humanity in its effort to rise from a state of sinfulness and selfishness to a state of redeeming peace, brotherhood, and dedication of all human resources to the alleviation of human suffering. Christ spent His entire public life teaching this: it is the establishment and the achievement of "the kingdom of God" that He so often talked about.

The basic truths of Christ’s revelation are that God, His Father and sender, is the creator of our whole universe. He created all out of love, for He is love (1 John 4:8, 16); His goodness made Him create things He had no need of and directs them all to their end according to their different nature; and out of that love He gave us the gift of freedom of choice. No other creature enjoys this freedom, perhaps not even the angels, and with it, human beings can choose to live forever in the bosom of His Love or to die deprived of that opportunity. The choice is to love God by loving one's fellow humans like oneself (Gal. 5:14, Rom 13:8-10); or to love only oneself as animals do. A very simple message.

Just as God the creator, by having humans emerge with their intelligence and reason in the midst of a wondrous universe, expected them by means of that reason and intellect to recognize Him as the creator of that wondrous beauty, Christ, by giving us just a few glimpses of His being and His ideas, clearly intended the Christian community, the Church, to gradually come to understand through the centuries what His being and His doctrine really are. He could have written a clear and splendid book containing the principles of Christianity, a masterpiece of theology, a summa theologica. Instead, we do not have even one line written by Christ. His witnessing was very brief and completely oral, often delivered in parables, in storytelling and maxims. These were entrusted to a small band of unschooled men to preach to an unbelieving world. Eventually His deeds and words were recorded in four gospels written in an extremely simple style. Clearly, He wanted His witnessing to be only a seed which the Christian community would develop through the centuries—not so much into a doctrine, but perhaps more into a way of being, the Christian behavior that He, the "new man," as St. Paul calls Him, exemplified: the behavior of the people of that "kingdom of God" He had announced as near.

This phase of revelation was not intended to reveal to human beings all the truths of our created universe. If Christ had revealed to His contemporaries the theory of evolution, for instance, or even just the fact that the earth was revolving around the sun and not vice versa, He would have been laughed at. His effort would have been wasted. Just as we do not try to teach a child the laws of physics only an adult can comprehend, so God's revelation had to keep pace with the ability of human beings to perceive theological truths. The mission of revealing the truths about the universe around us was not Christ's, but that of human science. It is a phase of revelation that God entrusted to our intelligence and eagerness for knowledge, the intelligence whose potential development He had encoded in His creation.

Umberto Mariani is Professor Emeritus at Rutgers University, where he taught for more than forty years and directed more than forty Ph.D dissertations and Master's thesis on Italian and American writers. He is the author of many books on Italian literature, dozens of articles, and hundreds of book reviews. Until recently, he was the editor of Italian Quartely, and NEMLA Italian studies published at Rutgers University. This article began as a letter to his teenage daughters and was refined over the course of twenty years. An expanded version of his ideas can be found  here.
God & Nature magazine is a publication of the American Scientific Affiliation, an international network of Christians in science: www.asa3.org