By Carlos F. A. Pinkham 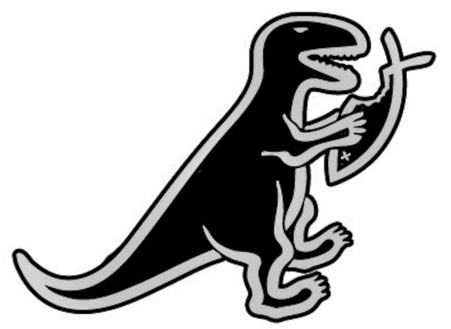 ​The other day I was driving on the interstate when an SUV passed me with the above emblem on the back. My first reaction was a sarcastic “Cute!” But as I gave it more thought, I became increasingly distressed by its implications.

There were three reasons I found it troubling. One is the suggestion that evolution is fatal to Christianity. The second is the truth that adhering to a fundamentalist, literal interpretation of God’s Word does, indeed, create a fatal tension between Christianity and science. The third is the implication that Christianity is dead or dying, indicated by the “x” on the fish’s eye.

The first suggestion appears to be true when we look at the processes of cosmological, chemical, and biological evolution without asking “why this way, and not some other?” With casual retrospect, they appear so logically sequenced and interdependent that we could conclude that they just happened by random chance. But doing so ignores the fantastic improbability of each of these events occurring without some prior conditions being placed upon them—the precisely tuned constants, forces, and masses and the subsequent playing out of their interactions across an expanding universe over time. For more on this, see my presentation at the 2008 annual meeting of the ASA (1).
Indeed, this “playing out” of events to produce us becomes so improbable that three infinities must be invoked for the observed process to have happened. Either we live in the one universe “that works” among an infinity of universes, or we live in the right part of an infinite universe, or the universe was created by an infinite Mind that planned for it to play out in the way it did. By doing so, that Mind guaranteed that in at least one part of His creation, finite minds would arise through these naturally appearing processes. Those minds could then become suitable receptacles for the infinite Love of this infinite Mind without jeopardizing one of His prime goals—to give these minds choice. Evolution need not be fatal to Christianity.

The fatal tension between Christianity and science occurs when pastors and parents are too often committed to a literal reading of the Bible that impresses a simplistic approach to Christianity on the youth of the Church. When these youth enter secondary, and, even more so, post-secondary schools, they encounter teachers and professors promoting postmodern positions. These academics eagerly jump on errors and contradictions in in the Bible caused by literal interpretations of the words. Unprepared to defend their beliefs in the face of this onslaught, our youth feel trapped in a corner and often escape that predicament by abandoning the faith of their parents and childhood. Their plight derives from their ignorance (in the literal, not pejorative sense) that God packed His Word with symbolism, poetry, allegory, and other non-literal conventions that communicate spiritual truths in an historical context, and that this symbolism draws on cultural knowledge extant at the time of the writing. It does not necessarily demand concordance with modern science. Science need not be fatal to Christianity.

There is no arguing that the third implication is true. Christianity is on the decline in America (2). As suggested above, much of that decline is occurring among the youth of evangelical Christians. If, instead, these youth and their parents would be introduced to and accept the deep and often subtle spiritual and secular truths conveyed through symbolism and other non-literal conventions found in the Bible, they would be equipped to answer the arguments of their professors. Of course, this sea change would also require that they understand the way God has buried His Spiritual Truths in His Word. He does not put all you need to know about His Holiness in Chapter One and all you need to know about His Triune Nature in Chapter Two. He intentionally buries nuggets of each and all other theological concepts throughout the Bible. He wants us to spend time carefully studying His Word, searching for every reference to a specific topic and then spending time pondering the results and collating them into a meaningful, coherent array of understanding. Although it sounds like an onerous assignment, in these days of computerized word searches, such activity is not only fun; it’s rewarding. And who knows, our youth may find the quest not only stimulating, but so “soterific” that it will produce a revived growth in Christianity in our country.

After all, Tyrannosaurus rex is extinct; Christianity is still alive.


Carlos Pinkham received a PhD in evolution from University of Illinois, Urbana Champaign, in 1971. He entered the Army's environmental program at its inception and retired as Colonel in 2003. In 1982 he joined the Biology Department of Norwich University, Northfield, VT, as a Visiting Professor, where he taught environmental biology and human anatomy and physiology. In 2009 he retired as Professor Emeritus of Biology. He is the author of “The Trouble with the Trinity, A Layman-to-Layman Study of the Biblical Evidence for the Triune Nature of God.” (Covenant 2019)
God & Nature magazine is a publication of the American Scientific Affiliation, an international network of Christians in science: www.asa3.org